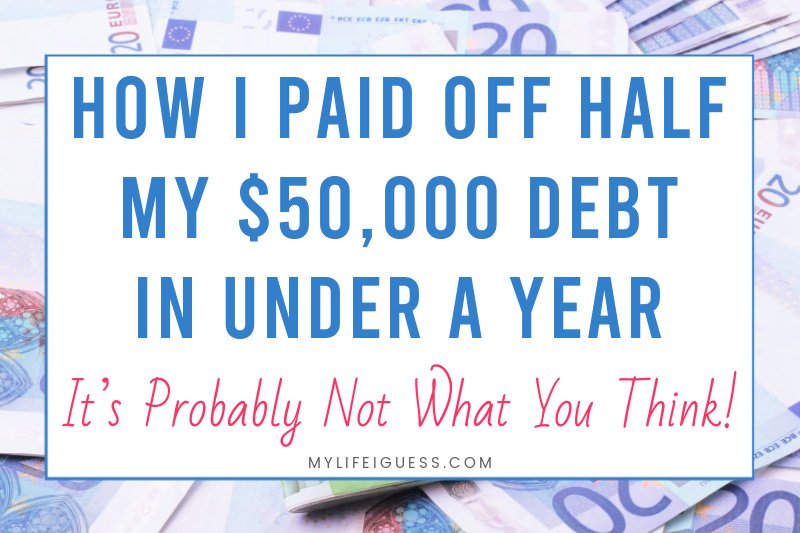 Yes, you read that headline right. I paid off approximately half of my $53,500 of debt in less than a year!

But it’s probably not what you think.

I Filed for Bankruptcy

It all actually started back at the end of 2019. In October, I spoke with a Licensed Insolvency Trustee for the first time. Just days before Christmas, I signed all the paperwork and made my first of 21-monthly bankruptcy payments.

By mid-September 2021, as long as things stay on track, my student loan debt and credit card debt will be gone!

For the first time since I initially signed that student loan application in 2002, (yes, nearly 20 years ago!) I will be student loan debt free!

Why Filing for Bankruptcy was Right for Me

Each person’s situation is different, and specific aspects of bankruptcy differ depending on what state or province you live in. So filing for bankruptcy may or may not be the right thing for you.

I’m not going to bury the details. I’m going to tell you exactly why it was the right thing for me.

(And I apologize for using a click-bait title, but there’s a reason I did.)

I had a lot of things working to my advantage:

I live in Canada

Bankruptcy in Canada works a little differently than it does in the USA.

In Canada, there is no upfront cost to filing for bankruptcy, which helped. The fees that I owe are included in my monthly payment.

I also didn’t have to hire a lawyer, attend court, or meet with my creditors. I literally spoke with a trustee over the phone a few times and met in person once to sign the paperwork. That was it.

I Graduated More Than 7 Years Ago

In Canada, if you’ve been out of school for 7 years or more, you can include your remaining student loan debt in your bankruptcy.

Had I known this, I would have looked into bankruptcy much sooner. I could have filed 3-4 years ago when I was unemployed and struggling a lot more. I could have been debt-free by now, and much further ahead.

(If you live in the USA, it is possible to include your student loans in your bankruptcy in some instances, but it’s rare.)

I Have No Assets

Whoever would have thought not having any assets would be a good thing?! But I truly had nothing to lose by filing.

I don’t own a house or mortgage (we rent).

Our living room furniture came from a surplus store and was damaged by our landlords.

Our car, which is in both my husband’s and my name, is financed. We don’t technically own it, and therefore it was exempt as a secured loan. (Which also means I won’t be completely debt-free when my bankruptcy is discharged.)

I also hadn’t contributed anything to an RRSP, pension plan, or any retirement savings in the year prior to filing. Being unemployed helped me out there, too, I guess.

My husband and I were not required to file together because the debts were all in my name only.

We had looked into including his credit card in the bankruptcy, too, but the math didn’t make sense. It would have doubled our monthly payment, which wasn’t going to help our financial situation at all. We didn’t want to set ourselves up to fail or end up filing for bankruptcy twice.

We are better off paying what we can on our own for now. Once we are done making the bankruptcy payments, we will take that same amount and apply it to his credit card instead.

So although this has already ruined my credit (which will take me years to build it back up), my husband’s credit isn’t directly impacted by it.

I’m not sure what will happen when it does come time for us to look into getting a mortgage (which we hope to do in 3-5 years), but if my credit score is still an issue, he can apply for a mortgage alone, if need be.

We Were Drowning in Debt

I’m sure some haters and trolls read posts like this and think that filing for bankruptcy is “cheating” or “taking the easy way out”.

But let me tell you, there was nothing easy about how I ended up here.

I spent more than 10 years struggling!

But it still wasn’t enough to even keep up with the interest payments, let alone pay down the balance.

We were drowning and had been for years.

Meaning that when I started looking into bankruptcy in 2019, I had already been paying back my student loan for 10 years. Over that decade, I had only paid off about 40% (or just over $20,000).

How could I possibly pay off the $32,500 remaining in the 5 years I was expected to?

Was I going to be in my 40s still paying back my student loan?

The fact that I went into so much debt to get a university degree but couldn’t find a decent job really added insult to injury.

I took a stress-leave from my first job when it turned toxic, where I was also underpaid. Then I was laid off from an amazing new job and spent 2.5 years working a combination of part-time, minimum wage jobs to survive.

When I was rehired in a full-time role, things started to look up when I accepted an internal promotion after a year. But then there was a serious health and safety issue that wasn’t taken seriously, so I moved on to what I thought was a better opportunity. It wasn’t. While still on probation, I was fired. I was eventually replaced by 5 people and won my wrongful dismissal claim.

Because I was unemployed once again, I accepted a casual position at an employment agency. Two weeks later, I was offered a full-time contract, which was extended several times. It became permanent in the summer of 2019.

Awesome, right? Surely I’d be able to tackle my debt now that my career was back on track!

I thought so, too.

But the permanent role meant more deductions off my paycheck, which decreased my net income by over $500 a month. It also meant that I made too much money to qualify for the repayment assistance program for my student loan, so I was now expected to pay them $775 a month.

Clearly, it was too much. We weren’t going to get out of this on our own.

Chipping away at the debt was getting us nowhere, thanks to interest charges.

While I can’t say for sure how much more we would have spent on interest had I not filed for bankruptcy, I can tell you this.

When I first started to consider bankruptcy, I did the math. We had already paid $18,650 in interest on the consumer debt alone. Carrying the debt for 6 years nearly cost us double.

I truly regret not looking into bankruptcy years ago.

You would have thought that as a personal finance enthusiast, I would have.

Bankruptcy isn’t talked about much in the personal finance world.

When it is mentioned, the advice usually doesn’t go much further than “avoid it.” Which yes, that is good advice – but it’s not enough.

The goal of most personal finance websites is to provide the best financial advice they can, right?

So why isn’t this financial management tool included as a viable option for those that are struggling?

What are people supposed to do when they are already in over their heads?

What good does keeping bankruptcy a taboo subject do for anyone?

Why aren’t we talking about how bankruptcy can be the lifeline people need to break out of the never-ending debt cycle?

What’s With the Click-Bait Title?

“How I Paid Off My Debt” stories should be inspiring. But honestly, they sometimes make you feel terrible, don’t they?

Like you’re not good enough because you’re in debt. Or that you’re doing it wrong because it’s taking you too long to get out of debt.

Don’t get me wrong. There are many honest stories out there from people who worked hard, made strategic choices to reduce their living costs, and are transparent with how they did it.

Like these: 12 People Talk Honestly About How They Paid Off Their Debt

On the other hand, we’ve all seen those articles that seem inspiring but bury the crucial details – like being given a free condo or getting hired at your parent’s company:

But as I secretly discovered, the problem might be worse than just using click-bait titles.

I asked several times in several blogging circles for stories or articles about bankruptcy when I was first considering it.

No one spoke up publicly.

But 6 other bloggers privately told me they had filed for bankruptcy at some point in their lives.

Two bloggers were very open about it and shared their stories with me. One explained why they didn’t share their story publicly, which I respect. The other used to have a blog where they publically shared their story, but that site has since closed.

But to my shock and surprise, the other 4 bloggers had intentionally refused to acknowledge their bankruptcy at all!

Nowhere on their blogs or in their featured articles do they even imply it.

They continue to boast about how they “paid off $25,000 in less than a year” (or whatever amounts), but NEVER disclose that filing for bankruptcy helped get them there.

Misleading people with a flashy click-bait title is bad enough, but is this not flat out lying?

I can’t say why these bloggers, or anyone for that matter, choose to hide their bankruptcy.

Maybe they’re ashamed? Worried about what admitting it might do to their reputation?

Maybe they are simply trying to maintain some privacy by only telling half the story, but are leaving out the wrong details?

Or maybe they are purposely being misleading jerks just to get more clicks.

I can’t control what other people do or what details they choose to share about themselves. I can only control what I do and what I share – which is exactly why I am sharing.

There‘s a stigma about bankruptcy. Even in the personal finance world.

There’s also a global crisis, which has left a lot of people in a financial crisis.

If you are struggling because of the pandemic, there is some temporary financial support available, which you should take full advantage of before ever considering filing for bankruptcy.

But don’t discount bankruptcy as ONE of your options – along with credit counseling, negotiating with your creditors, asking for help from friends or family, debt settlement, debt consolidation, a consumer proposal (which is similar to Chapter 13 bankruptcy), or selling your assets.

Filing for bankruptcy should never be your goal.

But if you are drowning financially and can’t see yourself getting out of debt within 5 years or so, it could be the second chance you need.

It was the best financial decision for me.