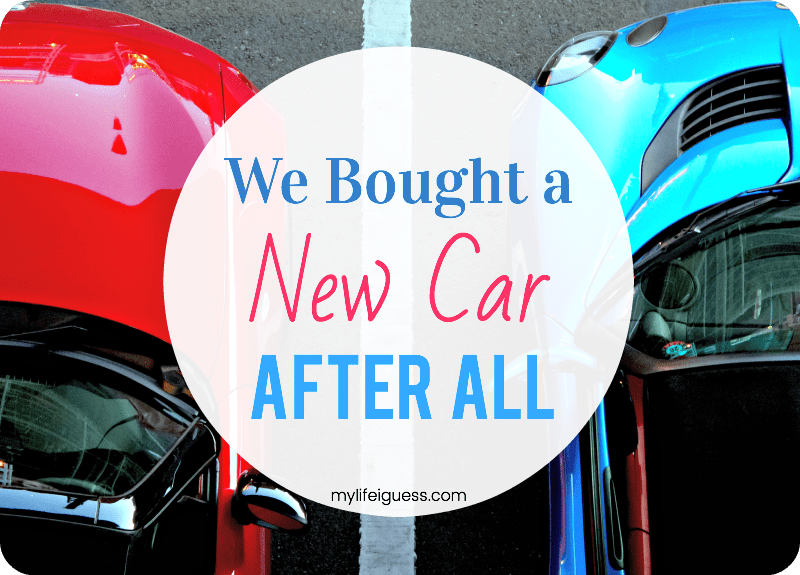 I recently had an article of mine, How I Was Almost Manipulated Into Buying a New Car, featured in both Women’s Money Talk and Rockstar Finance. Even though I’ve been blogging for over 5 years, this was my first time having an article picked up by curated sites.

I was so honoured and excited!

But I also couldn’t help but laugh at the irony of the timing.

On the day the post appeared on Rockstar Finance, my car was once again at the mechanics. (Maybe I jinxed myself with all the attention?)

Since getting that initial $3000 quote for repairs in early July, my 2010 Hyundai Elantra literally began to fall apart.

We fixed the brakes right away, but didn’t even have the chance to address the other $2,500 worth of work needed.

Every time I started the car, there was a new problem.

First, it died on me without any warning and the engine started smoking. (So maybe the scare tactics of telling me my engine might explode wasn’t too far off, after all?) We managed to get it home, but it died twice more along the way.

Thankfully, a friend of mine was able to come by with her mechanic husband to take a look at it for us. There wasn’t a lot he could do on the side of the road, but he was able to tell me that something was leaking.

(We only have one car, and my husband works at the city limits where there is no access to public transportation.)

Then it started to vibrate. Sometimes it was so bad that things would fall off the front seat.

Again, we had our friend look at it. This time in his garage where he was able to put my car up on a hoist and run tests with all his fancy diagnostic tools. But he still couldn’t pinpoint what was happening, and suggested we start with simply replacing the spark plugs (for a total cost of about $50). 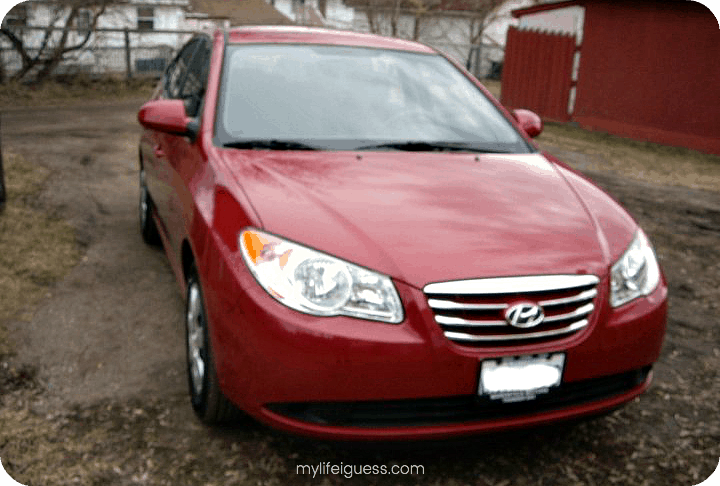 2 days later, my car stopped starting at all.

I was left stranded in the grocery store parking lot, where I had “quickly” stopped on my way to pick up my husband, who had just finished working a 12-hour shift.

By chance, a friend of ours also happened to be in the parking lot. He tried a few things and determined that there was no longer gas going to the engine.

But how? I had literally driven the car just fine not 10 minutes beforehand.

Over an hour had passed.

I couldn’t get a rental car (everything was sold out or had closed at 5 pm).

My husband managed to get a ride home, but was now locked out.

I was so frustrated with it all that I left my car there overnight, and walked home. A part of me hoped that it would simply vanish.

But it was still there the next morning.

I finally got a hold of CAA, who towed the car to Canadian Tire, once again. Since it was the long weekend, it sat there for 2 days before anyone could look at it.

So we had no choice but to spend another $120 on another rental car.

Up until this point, I had been happy with the service at Canadian Tire – especially compared to the service I received at the car dealership. But considering it was less than 2 weeks since they had “fixed” my car for me, I was not impressed that it had already broken down again.

I was even less impressed when instead of just doing the inspection on the car, like I had asked, they went ahead and did nearly $500 worth of temporary repairs. Temporary because they still weren’t able to tell me exactly what was going wrong.

Thankfully, Canadian Tire owed up to their mistake. We were still charged $125, though. And the temporary fix really was temporary. When I went to pick it up, they told me that they already had troubles starting it when they moved it out of the garage.

We had reached the tipping point.

We were done with sinking any more money into a car that apparently had nothing wrong with it – but didn’t work.

In 2 months, we had spent over $1,000 on repairs and $250 on car rentals and cabs. (The cost of cabs would have been a lot more, but I was too cheap/stubborn and walked a lot instead.)

We had another $2,500 in quoted repairs still to be done. A quote that didn’t include new tires and a new windshield, which were also needed and could cost up to $1,500.

5 different mechanics looked at the car, and no one could tell me what was wrong.

It was a very stressful situation to deal with. Not knowing if the car would start in the morning affected our sleep. I had just started a new job and didn’t want to make a bad first impression by being late or by not being able to show up at all.

When the car did start, I was a nervous wreck driving. Would it suddenly die on the highway? Would the engine start on fire? Or would I be left stranded again?

With winter right around the corner, we need reliable transportation. Being stranded at 7 pm in August sucked. There was no way I was going to risk being stranded at 4 am in January.

So we bought a new car!

I scheduled a test drive for a Tuesday, negotiated the price and applied for financing on Thursday, and drove home a brand new Volkswagen Golf on Friday.

And it (sort of) was just that easy!

Our first rental car was upgraded to a Volkswagen Passat. Getting that free upgrade pretty much sealed our fate, and convinced me that it was time.

When I first bought my car, it was just me. I simply needed a car to get me around town. But then I met and moved in with my now husband, who took a job that meant doing a lot more early morning highway driving.

Even without all of its maintenance issues, I hadn’t noticed how poor the performance of my Elantra had become. Or how much safer I felt in the Passat.

Unfortunately, the Passat was a little out of our price range. But the Golf wasn’t, and it came highly recommended.

We weren’t quite sure if we’d be approved for financing or not. I hadn’t even been at my new job for 2 weeks yet, and we were both on contracts. Thankfully I have a good credit score, came prepared with our financial details and was ready to negotiate with quotes from some local competitors.

Volkswagen matched the only discount that Hyundai was willing to give us. And then offered us a trade-in value for my old car that was in line with the quotes from Auto Trader, and was significantly better than the measly $400 we were originally told it was worth. 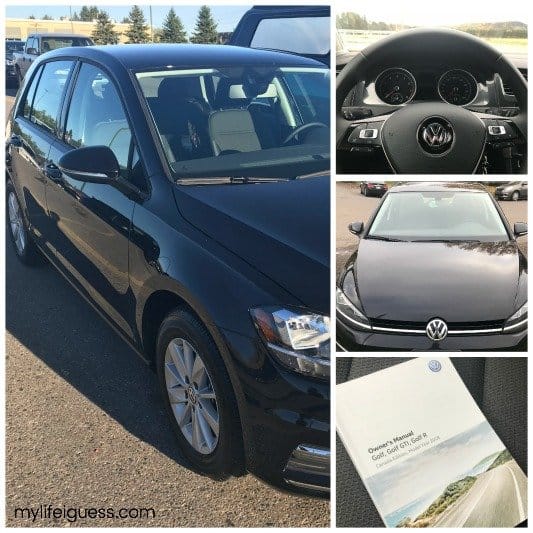 How to fit a new car into our budget

Not having a car payment for the last 3.5 years has been wonderful.

I highly recommend it!

We knew that having an 8-year-old car would mean that a new car payment was in our near future. But with only 80,000 km on it, we were not expecting it to happen quite so soon.

When we decided it was time to look for another car, we first looked into used cars. The hope was to find a good deal that would make things a little easier on our budget. But I couldn’t justify buying something that had more mileage on it then the car I already had did. What if we ended up with a lemon that needed just as much – if not more – work?

Instead, we started crunching the numbers, gathering quotes online and figuring out what we actually needed in a car vs. what we wanted.

Then we looked at our income and expenses. How were we going to fit another monthly payment into our already tight budget?

We had somehow managed to find the money for the car repairs and related expenses, so I knew it was possible.

My new job helped. As did the slight discount on my car insurance and the fact that the new car came with road assistance (and therefore we no longer needed a CAA membership). But with my husband’s variable income, some months could still be tight.

So we made a solid plan to cut back on our variable spending, and so far haven’t slipped.

I also gave up my gym membership and I’m continuing with my own side-hustles. My husband is looking into a course that could lead to a profitable side-hustle of his own (or could maybe even replace his main job).

I know that taking on another 5-figure debt is going to be tough. But given the circumstances, I think we made the best possible decision that we could have.

As long as I can avoid getting speeding tickets.

YOUR TURN: What’s your car situation like? Do you own it, lease it, have a loan – or maybe you don’t have a car at all? Do you see a new car in your future?

18 thoughts on “We Bought a New Car, After All”