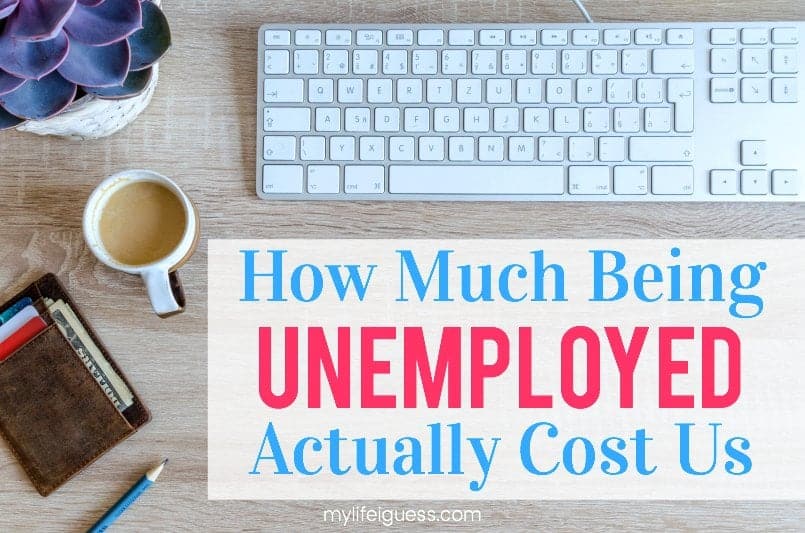 Throughout this blog and social media, I’ve been pretty open about the fact that I really struggled after being laid off back in April of 2014.

How I struggled for over 2 years to find a full-time job. How working a part-time, minimum wage job in my 30s affected my mental health. And, of course, how I struggled financially after my personal income was cut by over 75%.

But I haven’t really been so open about those financial details. Or more specifically, how much being unemployed actually cost us.

It Was Supposed to Be Temporary

The first few weeks after I was laid off, my now-husband and I were overly careful with our spending.

At the time, I was still pretty new to the whole personal finance thing. I had been tracking every penny I spent or earned and was thinking about money all the time. But I had never lived with anyone and had never had to consider anyone else when it came to managing our money.

We had literally gotten engaged only days before I was laid off, and were only a few months into living together. We were still getting to know each other and navigate our new lives together, as well as trying to figure out how to manage our money as a couple.

Together, neither one of us had a lot of money available.

Around the same time, my husband’s hours were cut for the summer, meaning his income dropped by about half. And I was waiting for my employment insurance to come through, which meant I had no income at all until July.

Sadly, when your income drops, your bills and expenses don’t magically drop, too.

So we pinched every penny that we had.

But this financial set-back was supposed to temporary.

My husband was offered and had accepted a new job in early July. But unknown to us at the time, he didn’t start this new job until mid-September

posting for a new contract with my job would be out any day, and I’d be rehired at the college for the new school year.

We just had to make it through the rest of the summer and then our employment and our financial situations would be back to where they were before. If not better.

We Spent Money That We Were Anticipating

We thought that by my husband accepting this new job that the pressure was off, and the worst was behind us. So although we were super frugal for the first few months, we started to relax a little.

In other words, we started to spend money that we were anticipating getting. Money that unfortunately for us, never panned out.

Then the summer ended. In September I found out I was being replaced and not rehired. And my husband’s new job wasn’t nearly as lucrative as we were led to believe.

Until this point, I hadn’t really been phased at all about being laid off. I was told that I’d be rehired, and I believed it. I had kept all of my files and was still identifying myself as a student advisor with the college.

It finally hit me that I wasn’t just off for the summer, or between contracts. I was, in fact, unemployed.

And had been unemployed for over 4 months already. Without a back-up plan whatsoever, or any promising job prospects.

Suddenly all those plans I had to pay off the $7,200 debt we had accumulated over the summer became an impossible task. A task that we are still not able to complete.

Yup – here we are in 2019, still carrying that debt that we first started to get ourselves into back in the summer of 2014.

Then the Debt Snowballed

Although I didn’t realize until now, this number is no coincidence. My income in this same time frame had dropped by $18,810.

So in a roundabout and unintentional way, we had used credit to replace my loss of income, almost to the penny.

The truth is, however, most of this debt was accumulated in the first few months after I was laid off.

We started off strong and frugal. But then let ourselves believe that it was “only temporary”. Therefore, it was okay to spend a bit more now because we could easily catch up once I was back to work.

We were naive and maybe even foolish, and had no idea that I’d be without a full-time job for so long.

Getting Into Debt Was SO EASY

Once I was maxed out and still unable to find anything more than part-time survival jobs, my husband opened a new credit card in the spring of 2015. And once again, as soon as he started to approach his card’s limit, the bank would increase it.

Not once did either of us ask for our credit card limits to be increased. I simply logged into my bank account, clicked a couple of buttons, and that was that. I didn’t have to go into the bank, I didn’t have to talk to an actual person, and I didn’t even have to apply.

We Needed Credit to Get By

People get into consumer debt for a lot of different reasons.

Some have poor money management skills and are irresponsible with their spending, buying things they don’t need and can’t afford.

Others aren’t financially literate, and get into debt because they don’t understand how credit, loans and interest works.

There could be an emergency or unexpected expense, such as an illness or accident that leads to getting into debt.

Or, like us, it could be due to a job loss and loss of income.

No, we didn’t buy shiny new toys or go on fancy vacations.

We didn’t even buy things that we needed. We learned to go without, or became more resourceful to make what we did have work. (Like the time that I super-glued my old winter boots back together or when my husband re-attached a broken windshield wiper with a hair tie and bobby pins.)

And to be honest, we didn’t pay our bills some months. Because we couldn’t.

We got into $25,000 worth of consumer debt within 2 years because we needed it to survive.

Being Unemployed Actually Cost Us A Lot More Than $25,000

I didn’t even want to think about how much interest we’ve paid – and are continuing to pay – let alone actually calculate it. But I did!

In the last five years, we’ve paid about $16,700 in interest on our consumer debt. Currently, it costs us over $325 a month in interest just to stay in debt.

(And this number does not include the interest I’ve paid and continue to pay on my student loan.)

Then there’s the loss of income.

Although I wasn’t exactly on a career-path after my “dream job” turned toxic, working part-time minimum wage jobs was not the path I wanted to take, either. I can only speculate as to what my income could have been, had my contract been renewed and I worked full time for those 2.5 years instead.

And as each month passes, carrying that debt is costing us even more.

I will happily share my story about how I basically spent $10,000 on nothing. I didn’t think twice about sharing in great detail about how I ended up with $80,500 in debt by the time I was 26. Or even how I, a personal finance blogger, had to ask my sister what a tax-free savings account was.

Because these things happened long before I knew anything about personal finance.

Back then I thought that I was good with money because I was good at saving money. I had little idea that there was more to managing money than that.

And one of the main reason I started this blog is so that I can share these sort of struggles and mistakes with you, so that hopefully you can avoid making them yourself.

I was obsessed with personal finance at the time. I knew better. Ignorance was no longer an excuse.

I quietly added the numbers to my Debt Repayment Tracker, because I want to be transparent. But at the same time, there was no way I was to draw attention to it. (Until now, I suppose!)

Because being in debt is embarrassing.

Not being able to pay your bills is embarrassing.

Having to ask to borrow money is embarrassing.

Sharing the details of your debt with strangers on the internet is embarrassing.

Being a broke, formerly jobless personal finance blogger who had to rely on credit to get by is embarrassing.

But I’m tired of being embarrassed by it.

And I’m tired of hiding it.

It happened, and there is nothing I can do to change that. What I can do is change the way I feel about it.

It’s time for me to own up to this debt. And more importantly, it’s time me to focus on getting out of it.

YOUR TURN: Are you or have you ever been embarrassed by your debt? What advice or encouragement would you give to others that feel the same way?

9 thoughts on “How Much Being Unemployed Actually Cost Us﻿”