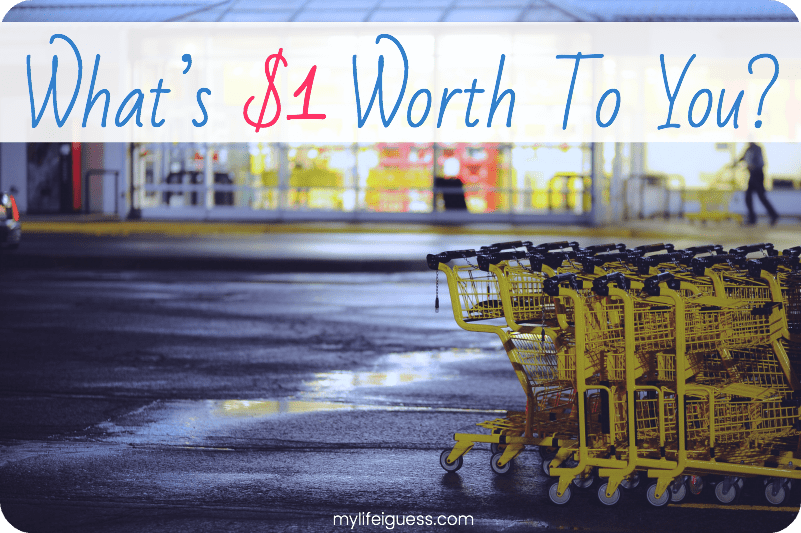 It was one of those cold, rainy days where winter couldn’t decide if it was coming or going. The freezing rain felt like it could turn to snow any minute, and the ground was one giant slush puddle.

Despite the weather and my lack of owning proper winter boots, my husband and I were out running a few errands.

While we were out, we decided at the last minute to pick up a few groceries from the discount grocery store in the strip mall. We were already there, and this way we could hibernate for the rest of the miserable (weather-wise) weekend.

Inside the grocery store, the mood was no better. We were cold and wet, and it seemed like everyone around us was just as grumpy as we were. The glaring fluorescent lights and bright yellow colour scheme within the store only made things worse. We were not having a good time.

Because we weren’t originally planning to go to the grocery store, I was not parked anywhere near the doors, either.

Pushing a full shopping cart across the un-plowed, slush-filled parking lot got our blood – and our blood pressure – pumping.

We weren’t quite fighting, but tensions were high. We both just wanted to get home and into dry clothes.

After we unloaded the groceries into the car in the freezing rain, my husband wanted to just abandon the shopping cart in the parking lot, instead of returning it into the store to get our $1 back.

I wasn’t willing to just give up $1 like that.

So I continued to brave the elements a little longer, and slugged the cart back through all the slush and puddles, and back into the store.

You see, the value of $1 has drastically changed for me over the last few years.

Yes – I was better off financially as a full-time University student working only part-time and summer jobs than I was 6 years after graduation, educated and with years of experience under my belt.

Making another $1 wasn’t as easy as it used to be.

If I had been working full time and still making almost $30 an hour, I probably would have just left that $1 behind. I could have easily made another $1 within 2 minutes of working.

Since being laid off in 2014, however, making a decent, consistent income has been a real struggle for me.

Even now, 5 years later, I’m in a job that I love – but only on a temporary, contract basis. Meaning in 6 weeks from now, I could be laid off and unemployed, yet again. (Please cross your fingers for me that this doesn’t happen, and that my contract is renewed instead!)

When I was first unemployed, I spent hours answering online surveys for 10¢ a piece, because that was the only income source I had.

So pushing the cart back into the store was worth the $1 to me.  I’ve worked a lot harder and a lot longer for less.

We didn’t really need that $1. We would have survived just fine without it. And to be honest, we probably wouldn’t have even noticed if it had just disappeared.

But I wasn’t going to just hand my hard-earned $1 over to a discount grocery store (that we only shop at to save 50¢) simply because I was cold and grumpy.

I know that $1 doesn’t really go far these days, especially when $1 CAD is only currently worth about 75¢ USD. But that was beside the point.

If I’ve learned anything from being unemployed and underemployed, it’s that $1 can be very valuable, depending on how you look at it.

YOUR TURN: So what’s $1 worth to you? Let me know in the comments!

Photo by Clark Young on Unsplash

Note: A version of this post was originally published in March 2016.