You’ve probably been asked this before and daydreamed about what your answer would be.

Would you take a trip somewhere? Pay down your debt? Buy something that you’ve always wanted?

I bet you wouldn’t actually do any of these things. At least not to the extent that you think you would.

I bet you’d spend most (if not all) of this money on “nothing”.

Because that’s exactly what I did when I found myself with $10,000 sitting in my bank account.

I didn’t pay down my debt. I didn’t take a vacation. I didn’t buy a used car that I always wanted.

I spent it, little by little, on things that I no longer remember and likely no longer have.

It was almost a decade ago now. I was 24 and in the last few months of my undergrad. And I had $10,000 sitting in my bank account.

Throughout University, I borrowed student loans to pay for my education. But each semester, I’d get more than I needed to pay my tuition.

I had a well-paying part-time office job during the school year and worked at least one job every summer. I lived in student housing with anywhere from 3 to 5 roommates. I didn’t have a car and didn’t travel. And I had no credit card debt.

I always had enough each month to pay for my needs, spend a little on my wants, and still had money left over to save.

So I could have survived without the extra student loan money. But I accepted the full amount each time anyways, which eventually accumulated into $10,000.

I’ve always been good at saving money, which I thought also meant I was good at managing money.

But clearly, this was a mistake.

My Money Wasn’t Working for Me

First of all, I shouldn’t have kept 5-figures worth of savings in a plain old bank account. Because I was only earning 8 cents a month in interest and was paying the bank $3.50 a month just to have the account. 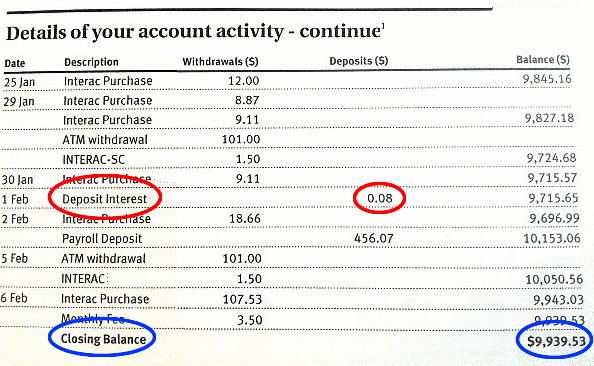 I finally moved most of my money into a high-interest savings account after getting a cold call from the bank about it. (The Tax-Free Saving Account had yet to be introduced.) I began earning $18 a month in interest instead, which was so much better than 8 cents!

But it still barely put a dent into the $200 a month that my student loans were accumulating in interest.

Moving my money to a high-interest savings account was a small step in the right direction, but I should have done so much more.

I didn’t know much about personal finance at the time and used that as an excuse. But I could have learned. I could have called the bank for advice or turned to Google. Who knows, maybe I would have stumbled upon Personal Finance blogging sooner and avoided making these money mistakes altogether.

My Money Was Too Accessible

Having only one bank account meant that my savings were very accessible.

After a few bad life decisions (which including taking an extra year of school for some reason, moving twice in 3 months, and not changing my spending habits despite being unemployed) the $10,000 in savings that took me years to accumulate was gone in less than 6 months.

And I had nothing to show for it but a long list of debit transactions.

I should have opened a second account designated specifically for my savings. One without a debit card attached to it, so at the very least I’d have to go to the bank to access this money, opposed to simply swiping a card that I always had with me.

Having a separate spending account would have also forced me to spend smarter. It’s easy to dismiss those small $8 lunches or $15 trips to the movies when you have $10,000 in the bank. But what if I only had $1,000 in my account? Would I have let these little purchases add up so quickly then?

It Wasn’t Really My Money

I liked having a huge savings account – who wouldn’t? But I let that cloud my better judgment. I didn’t see it as a debt to be paid back. I was convinced that this money was in fact “mine”. And that I could choose to do whatever I wanted to do with it.

I should have paid it back. (Duh.)

Even if I had only paid back half, the $5,000 would have reduced my overall loan by 10%. And I would have saved myself thousands of dollars in interest charges over the years.

I Wasn’t Planning For My Future At All

I like to pretend that I was never ignorant about my finances, but people who are good with money don’t generally spend $10,000 on nothing.

Saving your money, as it turns out, is not enough.

I was adding to my student loan debt instead of paying it off. I wasn’t letting my money work for me. I wasn’t always living within my means.

In short, I wasn’t planning for my future at all.

Oh boy, where do I even start?

YOUR TURN: What do you think you would actually do if you had $10,000? Would you be smart with it or allow yourself to splurge? Or would you do like I did and essentially spend it on “nothing”?