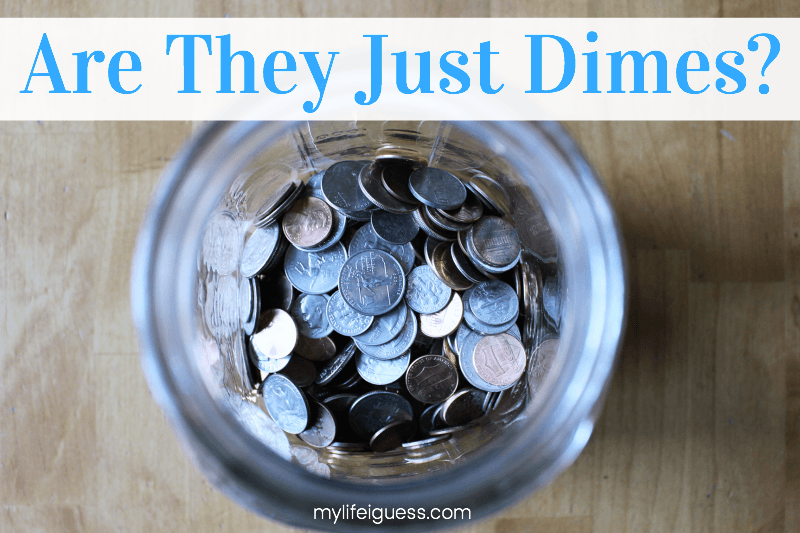 I find dimes on the ground all the time.

Especially since they phased out the penny a few years back, here in Canada.

Occasionally I’ll find a nickle or a quarter. But 99% of the time, I find dimes.

My husband always humours me when I proudly announce that I found another dime that day.

If I saved up all the dimes I found over the course of a year, I’d maybe have enough to buy myself a cup of coffee.

Amanda, why are you writing about dimes???

My cousin Katie got a ride with us to my hometown to attend her funeral.

Although Katie lives close to us, I don’t really see her much. She has 2 small kids and a lot going on. I, on the other hand, have become a homebody.

Katie works in a field that is closely associated to where I was working at the time, and where my husband still works. Normally, we can’t talk about “work stuff” with other people due to the confidentiality and security risks. So it was nice to be able to talk a little more openly about it with someone other than each other. And to hear her thoughts, coming from a very different perspective.

I mostly listened as I drove.

I don’t remember how it came up, but at one point, she started to talk about her massage therapist. More specifically, how her masseuse reads “energies”.

I kind of believe in that sort of thing. But I also kind of don’t.

So I just continued to listen.

Katie said that her masseuse asked her about dimes. More specifically, if she randomly finds dimes all the time or not.

(At first I thought she was saying “diamonds” instead of dimes. Which would be pretty cool if my cousin found random diamonds all the time, wouldn’t it?!)

I gave my husband a knowing glance, and continued to listen.

Katie went on to tell us that her masseuse told her that dimes are closely linked to her father. When Katie “randomly” finds dimes, it’s not really random at all. It’s her father’s way of letting her know that he’s around.

Katie’s father (my uncle), passed away at Christmas over 10 years ago. I was pretty close to him as a kid, but we grew apart as I grew up, moved away, and started my own life. But his death was one of the first that I experienced, and is something that still really affects me to this day.

So you can only imagine how I felt listening to her story.

And how she was told that it’s a sign from her father. My uncle.

As I drove to his mother’s (my grandma’s) funeral.

I never put much thought into the dimes before.

They were just small money wins for me, when I was broke, unemployed, and needed those small wins.

Maybe my uncle somehow knew that.

And he wanted me to know that he’s around for me, too.

Or maybe they are just dimes.

Image by mnplatypus from Pixabay

3 thoughts on “Are They Just Dimes?”