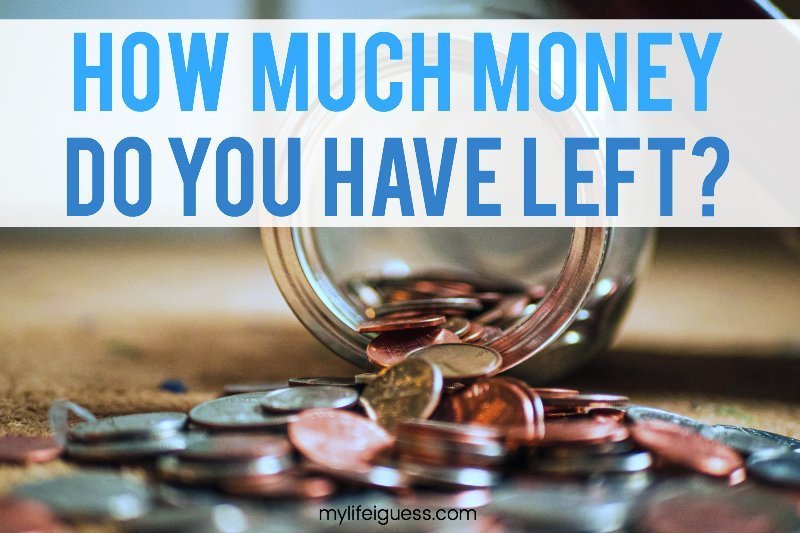 When was the last time you had no money left? I mean that literally.

Nothing in your bank account. Nothing in your wallet. No emergency $20 hidden under your mattress. Nothing in a piggy bank or the cup holder in your car. Nothing until payday – which could still be days or maybe even weeks away.

While I hope that no one is ever in this situation, I know that people are.

Because I was very recently one of these people myself.

From Super Saver to Super Broke

5 years ago, if you were to ask me how much money I had left I wouldn’t have fully understood what you meant.

Because I always had at least some money left.

(Whether I was willing to spend that money or not is another story.)

I’ve always been a saver. As a child, I had money in my piggy bank and in my bank account. Even as a university student, at one point I somehow had saved $10,000.

Since being laid off roughly 5 years ago, however, the question of “how much money do you have left?” basically became how my husband and I budgeted.

Not because we wanted to. Because we had to.

My husband has regularly been getting full time (or more) hours at his job, but he is not a full-time employee. He could easily be scheduled for 0 hours one week, and then 60 hours the next.

My employment (and side hustle income) has not been consistent at all, either. Shortly after we moved in together, I was laid off and ended up working part-time survival jobs for nearly 3 years. I then accepted a full-time job outside of my field, where I experienced a serious false alarm. Then I had a horrible boss who fired me. I spent the last year working contract to contract in a job that I love – that thankfully became permanent last month!

Which hopefully means the worst is behind us. And also means that we now have alternating paydays, and have money coming in each week – which really helps, too.

So budgeting in any sort of consistent way other than the “what’s left?” approach has been impossible.

The “How Much Money Do You Have Left?” Budget

For the most part, this sort of “budget” is exactly like any other budget. It’s a plan that you make for how you’re going to spend your money. Regardless if that’s $5,000 or $500.

But it isn’t complicated.

There are only 5 steps to the process:

1. Figure out how much money you have for the month or until your next pay-day

2. Make a list of what your spending priorities are (such as shelter and food)

3. Rank them by importance

4. Note due dates and try your best to meet them to avoid paying late fees

5. Put your money towards your priorities in order until you don’t have any money left

If you do happen to have money left over (and you’ve double-checked that your math is correct) –  great! Use that money in a smart way. Catch up anywhere you’ve fallen behind. Get ahead with one of your top priorities. Set it aside in a savings account. Pay off some of your debt.

Otherwise, you will likely need to repeat this process regularly. Maybe even daily. Because your priorities will change, especially as the money disappears and the stress on your finances increases.

When I was in this situation, I would come up with an overall monthly plan and would reassess it every pay-day. But things would periodically change in between.

The “how much money do you have left” approach to managing your money is not ideal by any means. But when you are living in a paycheck to paycheck situation like we were (and are still recovering from), it might be the only choice you have.

Be prepared to have some real ups and downs with it.

Sometimes the bills were paid, the kitchen was well stocked, and we still had money left.

Other times, when things were at their worst, we would have no money left only a day or two after being paid.

When that happened, we’d scrounge together whatever loose change we could find. We had to decide which bill were we going to have to skip paying that month. We would dig to the bottom of our freezer and to the back of our pantry to put together whatever meals we could. Several times we humbly had to ask family for help so that we could eat or put gas in the car.

At one point everything lined up horribly and we literally had ZERO income for over a month. Our savings accounts were drained, our credit was beyond maxed out, and we had exhausted all of our back-up options.

The only thing that saved us was one of the many “make extra money online” options. (So yes, there is some real value to them!) I was able to make $140 over the span of a month – $10 at a time with UserTesting. $140 isn’t much, especially when it’s got to last 2 people for a month. But it undoubtedly saved us when we were in a desperate situation.

Most of the time, however, we fell somewhere in the middle. The essentials were covered, but anything extra (including paying down our debt or putting any money into savings) was out of reach.

It’s Not Just You

Unfortunately, the situation we were in is not unique by any means.

Many people have very little to no money left over after paying for their essential needs, housing costs, and bills.

And 59% of all Americans (according to a 2019 survey from Charles Schwab).

Or they might find themselves in an emergency situation that unexpectedly drains their bank account or maxes out their credit card.

Hopefully if you find yourself needing to follow the “how much money do you have left?” budget it’s only temporary. But as I learned, “temporary” can still mean a few years.

So whether you suddenly find yourself worrying about how much money you have left, or you’ve been living this way for a while, you need to be thinking about what’s next. What you can and need to do to get your finances back on track. Or better yet, to get ahead.

If you’re in survival mode, there may not be much else you can do at the moment but survive. But that doesn’t mean you should just accept the situation you’re in, either.

Start identifying and addressing the circumstances that led you here. Don’t ignore them!

You won’t be able to overcome your financial issues if you aren’t clear as to what they even are. So you need to identify exactly what the underlying problem is.

It could be something that should only be a temporary set-back, like you’ve recently lost your job and are trying to find a new one. Or you’re adjusting to a big lifestyle change, like having a baby or going through a divorce.

Maybe you’ve been living above your means for some time and didn’t realize just how much you’ve been over-spending.

Or you’re carrying a lot of high interest debt.

Or you have a money disorder. (Side note – this is a GREAT article that I think everyone should read regardless of their financial situation.)

Research and explore your options.

Are there government supports available to you?

Do you need to move to somewhere more affordable? Or sell your car and get a bus-pass instead?

What do you need to do to get a promotion at work or to get a better paying job? Do you need to go back to school or learn a new skill?

Although it can feel like you are stuck in a hopeless situation, you can overcome living this way. But it will take time, effort, and smart decisions.

Focus on surviving. Identify the source of your financial problems. Start making positive changes to fix them. And one day you will have money left in your budget instead.

YOUR TURN: Have you ever had no money left? What did you do to improve your finances? Please leave a comment and let us know!

1 thought on “How Much Money Do You Have Left?”