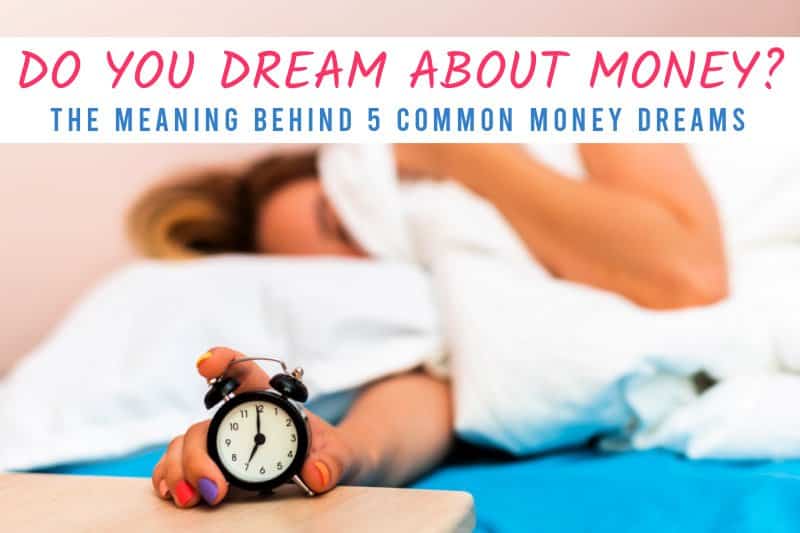 Do you dream about money?

Somewhat surprisingly, most people don’t often dream about money, or at least, it doesn’t often show up in a literal way. In fact, money dreams don’t even show up in the top 50 most common dreams, according to dream analysts.

So, what does it mean when we do dream about money? While there is no proven dream interpretation, there are several theories about the different meanings money represents.

While money dreams can come in many different forms, and even metaphorically, we’re going to focus on 5 common money dreams and what experts think they might mean.

But first, what are dreams, and why do we have them?

Dreams are essentially hallucinations that happen when we sleep. They are most likely to happen during deep sleep or the rapid eye movement (REM) stage of sleep but can occur at any time in the sleep cycle.

Although everyone dreams, not everyone remembers their dreams or may only remember them once in a while. Because most of our dreaming happens during REM, it’s likely you won’t remember what you dreamt about unless you wake up in the middle of it, or it’s a recurring dream. Another very common scenario is that you wake up and only remember part of a dream.

When you do remember dreams, you’ve likely experienced a wide variety of them. Some may be vivid and clear, while others don’t make any sense. Some may evoke strong emotions, and others may not. And some are downright wacky.

Scientists think that the reasons our dreams often don’t seem to make sense are twofold: First, our brain’s emotional centers are more active during sleep while the logical ones are less active. Second, they believe the brain uses sleep to filter through memories and decide which to store and which to toss out.

This combination of rapid filtering of memories and more active emotional centers can make for some pretty strange dreams. But no matter what form your dreams take, it’s likely that they are based primarily on your recent activities, thoughts, and conversations. Again, your brain is attempting to filter, file, and make sense of information in the background while you sleep.

Why Do We Dream?

While scientists and laypeople alike clearly understand what a dream is and how they happen, it’s unknown exactly why we dream or the role that dreams play, although there are some theories.

One idea is that dreams allow us to confront strong emotional issues in our lives, and our unconscious mind makes connections that we wouldn’t make while we’re awake. This theory is based on the knowledge that our emotional centers are more active during sleep and thus able to process emotional information without our logical centers getting in the way.

Another idea is that dreams help prepare us for threats. The amygdala, the watchdog of the brain that triggers your fight, flight, or freeze response, is one of the most active regions during sleep. This theory may help explain why so many dreams are about survival scenarios.

Yet another theory postulates that dreams help us bring out our creative sides. Many artists, musicians, and writers have credited dreams with giving them an idea for their work. Again, the logical centers are less active during sleep, so the theory is that your emotional and creative parts are free to run wild during sleep.

One last theory on why we dream is that they help us store important memories and things we’ve learned. Being as the brain uses sleep as a time to file and sort our memories and thoughts, it isn’t a big stretch to think that dreams help aid that process rather than just being the result of that process.

The Meaning Behind Different Money Dreams

Based on dream research, it’s likely that dreams about money, like dreams in general, result from your brain trying to filter and make sense of recent memories, events, and thoughts while you are asleep.

While there is currently no way to definitively know what it means if you dream about money, several theories attempt to explain what money dreams may mean.

Let’s discuss some of the most common dreams about money and their theorized meanings below.

Finding money is one of the most common money-related dreams. In these dreams, you may find money in a coat pocket, while walking down the street, or in some other unexpected location.

According to dream expert Kelly Sullivan Walden, dreams about finding money may represent the ability to value what matters most to you and parts of your life that you may previously have taken for granted. Perhaps you have developed or renewed your sense of self-worth and appreciation, and in this case, finding your long-lost money is the metaphor for finding yourself.

Others suggest that dreams about finding money are a good sign that things are going well in your life and a general feeling of positivity. The rush of excitement and positive emotion you feel upon finding the money mirrors how you’re feeling in your life, either from a one-time positive event or a general sense of well-being.

Another common money dream is about winning money, such as winning the lottery. As with finding money above, dreams about receiving money are theorized to similarly represent feelings of well-being and happiness in your life.

Dream expert Anna-Karin Bjorklund suggests that the feeling when you win money in a dream could be related to other areas of your life that you feel you have won. This might be a new romance, a promotion at work, or a good grade at school. She also suggests that you try to harness the positive energy and emotions in your dream and try to translate those to other aspects of your life.

You could also try to translate this positive momentum into real-life money goals.

While dreams about finding and winning money leave us with feelings of excitement and happiness, dreams where we lose money have just the opposite effect. (At least it was only a dream.)

Unfortunately, according to Bjorklund, these dreams may not be just dreams. Rather, dreams about losing money can serve as a reflection of how you’re feeling about your finances, especially if you’ve recently experienced setbacks like losing your job.

On the other hand, dreams about losing money can also represent other losses in your life or fears about potentially losing someone or something.

If you’ve had a dream about losing money and are not satisfied with your current financial situation, take some time to re-evaluate your money goals and create a plan to get yourself back on track.

Like dreams about losing money, dreams about debt collectors are also likely to evoke unpleasant feelings and may even turn into nightmares.

Dream expert Lauri Quinn Loewenberg says that these dreams could either be literal or metaphoric. If you are behind on bills and struggling with debt, your stress about money is likely creeping into your subconscious, and you probably won’t find relief until your debt is resolved.

On the other hand, if you don’t have a debt problem, Loewenberg says that it’s likely that something else is bothering you. In this case, debt collectors harassing you in the dream might represent you harassing yourself over something you know needs to be resolved.

Experts agree that in this case, you may continue to be plagued by these types of dreams until the stress in your real life has been resolved.

The final most common type of money dream involves giving money away to someone else. In this case, the dream’s interpretation is based more on how you felt while giving the money away than the act itself.

If you experience negative feelings when giving money away, dream experts say that could be a sign that you fear losing prosperity in real life or that you may have given away too much of something. You may also be feeling hopeless about the ability to help someone you care about.

In contrast, if you experience positive feelings when lending someone money or giving money away, then it’s likely you’re feeling prosperous and abundant in your waking life. You may also feel good about volunteering or making a difference by helping others in some other way.

Turn Your Dream About Money into Reality

If you dream about money and it’s a good dream, likely, you wouldn’t mind turning your money dreams into reality.

While things like winning the lottery or finding money on the street are out of your hands, there are several things you can do to improve your financial situation and extend that winning feeling to your everyday life.

First, you’ll need to figure out where you are and where you want to go. Calculating your net worth and some other critical personal finance numbers will help you understand where you currently stand. Next, create a budget so you can see where your money is going every month.

Once you know where you stand, you can create a plan to get you on the road to turning your good dreams about money into reality.

Will you make your dream about money a reality?

Tawnya, along with her partner, Sebastian, runs the blog Money Saved is Money Earned. She holds an Honors BS in Psychology and an MS in Special Education and has had a pretty successful writing career, first as a writing tutor, and in recent years, as a freelance writer. Tawnya and Sebastian have a wealth of knowledge and information about personal finance, retirement, student loans, credit cards, and many other financial topics.