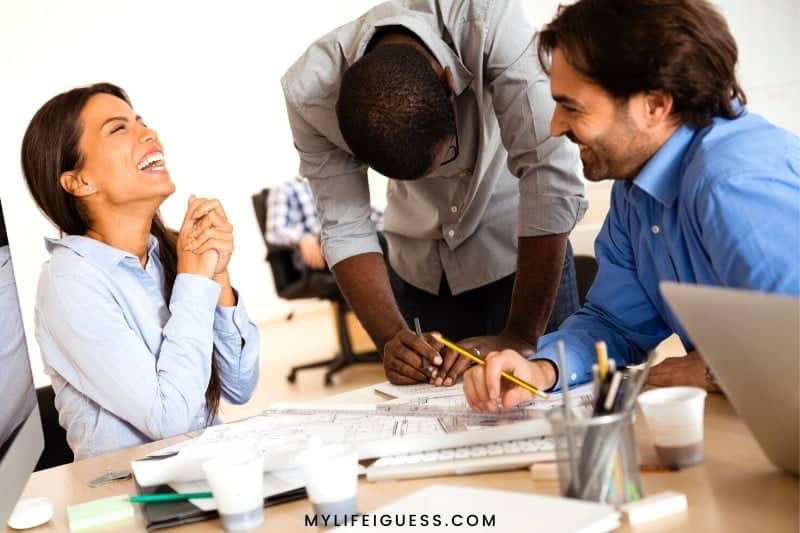 Quick, answer this question: How many people would you consider to be dumb at work? Or, at least sound dumb? Maybe 10%? 50%? Now, here’s a better question: Why?

Fundamentally, very few of us are actually dumb. Otherwise, we probably wouldn’t maintain relatively decent jobs and make enough to provide for our families. However, that doesn’t mean that we don’t say dumb stuff at work. We all do. From time to time, we all sound dumb.

I served as the Director of Information Technology for several years after slowly working my way up the pay scales from a low-level software developer. Over those years, I’ve witnessed a lot from all different layers of management. From hourly staff members to the CEO, I worked with hundreds of people from all walks of life, experiences, and intelligence levels.

And if there’s one thing I know, it’s what not to say at work.

Unless you work from home, even under your breath, people hear you. Coworkers hear you and, yes, management does as well. If you are a constant criticizer, you’re building a reputation. Your coworkers might outwardly agree, but your coworkers also don’t provide your raises or offer promotions. They also don’t provide a career path for you or pick opportunities for you to get ahead.

That’s management’s job. And, management tends not to like to promote people who are trouble makers, who come across as arrogant, cynical, or just plain dumb.

Are you making one of these five mistakes at the office? If you are, stop, because you’re making yourself sound dumb.

5 Phrases That Make You Sound Dumb at Work

1. I went to [insert designer school here], so I would know.

Name-dropping can work, but very often, it hurts more than it helps. It implies that you believe that your credentials alone make your opinion more worthy or valuable, and implicitly, you’re trying to insert a holier-than-thou separation between you and your coworkers.

In truth, your experience and accomplishments should dictate how valuable your opinions are based on a proven track record of both successes as well as failures.

When I played Little League baseball as a child, my dad used to tell me, “Let your pitchin’ do your talkin’.” In other words, let your performance do your talking for you, not your mouth. Instead of talking a good game, just throw strikes. That will speak volumes.

As a 14-year veteran of the Information Technology industry, working in all types of positions – from a lower-level tech guy to the Director of Information Technology, I often learned that your chosen college (especially talking about your chosen college) makes very little difference in your ability to do the job. Those who kept their heads down and paid attention to their work performed better and were easier to work with than those who touted their credentials.

In fact, some of my best staff members attended community colleges and regular state schools, not big-named Ivy League institutions with designer degrees.

Do you need an ivy league education to succeed? Unless you plan on serving on the Supreme Court, the answer is probably not.

Here’s something that might sound counter-intuitive at first: The longer it takes for you to explain a concept, the less that you probably know about it. Weird, huh? But, it’s true.

Simplifying complex subjects is a trait of great speakers, too.

Subject-matter experts know precisely how to explain complicated and intricate concepts using plain English in a couple of minutes (or even seconds), making each word count. Writing in plain English is more easily understood by a wider audience and effectively distributes information to those who need it. Making subjects sound complicated does not make you look smarter.

The smartest people I’ve worked with had an incredible knack for describing what they did using simple terms, common language and generally took less than a minute.

Using filler words is something that happens to all of us – yes, myself included. But the less that we use them, the more intelligent we tend to sound. And, the best way to avoid using filler words is to think before we speak. Instead of knee-jerk verbal reactions, take a couple of seconds to mentally build your response, then deliver it eloquently.

This will take practice. It’s not a switch that can be flipped.

For most of us, it’ll take several days, weeks, or months of practice to get right, and even then, we won’t be 100% perfect. That’s okay; perfection is unattainable. However, keep trying. If you catch yourself responding too quickly and using filler words, stop.

Stop, catch your breath and consider what you’re trying to say.

The day that I was promoted as the Director of Information Technology was the day that my whole world changed. Finally, I got to see what my managers dealt with every day, the stresses of answering to higher-level management and gently working through sensitive office politics and petty work conflicts.

I learned that management wasn’t for me, but that’s not all.

That was also the day I stopped criticizing management. And when I see lower-level staff constantly second-guess their superiors, I instantly know those people probably have never been in a position to lead. The truth is it’s easy to criticize, but it’s not as easy to make everybody happy.

Every level of an organization has problems and conflicts. Management rightly shields their staff from these problems, but their decisions are often bread from upper-level influences that staff members have no idea exist. What might seem like a “stupid decision” may stem from business decisions that are well above the pay grade of lower-level staff.

That’s not to say that managers don’t make dumb choices. Some do. But, resist the temptation to second-guess everything that your manager does because he or she is exposed to a variety of higher-level concerns and influences that you probably have no idea are there.

“I was just following orders“.

Understanding the context of the problem prepared my top-performing staff members to design solutions that were more robust, accurate, and well-rounded than those who simply accepted the assignment without asking a single question…just doing what they were told.

Those who just followed orders were “worker-bees.” And, I’d quickly learn that those members got the grunt work, the work that didn’t need a lot of thought or experience.

And, they very rarely got promoted.

In contrast, the folks who understood the problem and took the time to ask questions stood out as those who wanted to do a good job. They cared about their work and made no excuses when things went wrong. They accepted responsibility for everything that they did.

“I did what I was asked to do” was not in their vocabulary.

What do you think? What dumb things do you hear at your office? Are any of your coworkers making these mistakes? Leave a comment and let us know!

Steve Adcock is an early retiree who writes about mental toughness, financial independence and how to get the most out of your life and career. As a regular contributor to The Ladders, CBS MarketWatch and CNBC, Adcock maintains a rare and exclusive voice as a career expert, consistently offering actionable counseling to thousands of readers who want to level-up their lives, careers, and freedom. Adcock's main areas of coverage include money, personal finance, lifestyle, and digital nomad advice. Steve lives in a 100% off-grid solar home in the middle of the Arizona desert and writes on his own website at SteveAdcock.us.