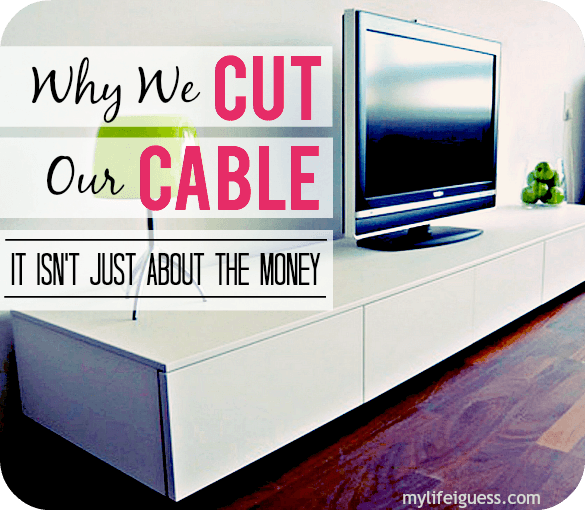 When it comes to saving money, cancelling your cable is one of the most common recommendations made in the personal finance world. And it’s not hard to figure out why.

Between cable, the Internet, cell phones and maybe a home phone, telecommunication costs are expensive. According to the Canadian Radio-Television and Telecommunications Commission (CRTC), the average household paid $191 per month (or just under $2300 per year) for these services in 2014.

And some people, like those of us living in Northern Ontario, pay a lot more. Before we decided to cut our cable again, we were paying $280 a month (before tax) for the second lowest bundled package available to us. And another $9 for Netflix.

Of that, $65 got us about 100 channels. While that isn’t really a bad price, it was a waste of money when we only watched maybe 15 channels, yet were forced to pay for more. (Although, Canada is supposed to be introducing “à la carte” cable by the end of next year, which might make it a more affordable option again.)

Regardless, paying $300 a month to watch tv was too much for us, especially while I struggle to find full time employment again. So we decided to cut our cable again. After all, the Internet can do what cable does, but cable can’t replace the Internet.

For the Love of Television

I have always been a tv watcher. Always. So it was kind of a big deal when I first decided to cancel my cable a few years back. But I was new to this personal finance world, and cutting your cable is the second thing you must do – after you stop buying take-out coffee, of course.

I adjusted fairly well, as for whatever reason I still got a handful of channels for free. One of which was AMC, so it helped to still be able to watch Breaking Bad and the Walking Dead. It also helped that I was working 60+ hours every week. And had my sister’s Netflix password.

But when R and I moved in together, our rental came with a promotional free year of cable and Internet. We were both excited by the novelty of having cable again, and it quickly replaced the other forms of entertainment in our life, such as going out and socializing.

As the end of our free year approached, we decided to keep our cable. Changing the account into our names meant we were “new” clients and were eligible for a 50% discount for our first 3 months, and our DVR was full of shows and movies we hadn’t gotten around to watching yet. But once this promotion ended and we got our first full-price bill, we decided to cut the cord, once again.

Between R’s shift-worker schedule, and me either not working or only working part time, it didn’t make sense for us to commit to another monthly expense, especially when we didn’t always know our monthly income.

Another big reason was me. Or more specifically, me trying this whole self-employed, working from home thing.

I quit my part time job just days before my cat died, which didn’t leave me in a good place mentally speaking. I spent most of my time moping around the house, and watching a lot of pointless tv. It was a distraction; something to do to keep my mind off of other things.

The problem is, “other things” also included being productive.

And that was okay at first. I needed the time to grieve, to adjust to being unemployed again, and to figure out what to do next.

But I ended up getting myself into a bad routine that involved too much tv, and not enough of anything else. I would tell myself that I’d just watch one show while sipping my morning coffee and then get to job hunting, writing, or cleaning the house – but I’m sure you can guess how well that went.

So, when R and I were once again trying to decide what to do about cable, I voted to just get rid of it. I hoped that by eliminating my main distraction, I could actually start to take my unemployment seriously, and start to make something positive happen.

Within a couple of weeks of being cable-free, something positive was happening. I found myself an accountability partner (well, she found me). I published a profile on a babysitting website (and now babysit the cutest little girl a few times a week). I added more online/freelance job boards to my daily check list (and have applied for a few). I even sat down and made a real debt repayment plan with some help from The Penny Hoarder.

Now, I’m not saying it was televisions fault that I got stuck in that slump for so long. And unfortunately, I’m not saying that simply cutting your cable will make you a super productivity machine either. But it absolutely helped me.

I still sometimes get sucked into watching “just one more episode” on Netflix, but I’m so much more conscious of it now than I was with cable. It probably has something to do with the 20 second countdown between episodes, reminding me that I’m just wasting time.

I waste much less time now.

YOUR TURN: Do you still have cable? If so, do you consider it to be a distraction? If not, what sort of things distract you instead?

21 thoughts on “Why We Cut Our Cable Again”