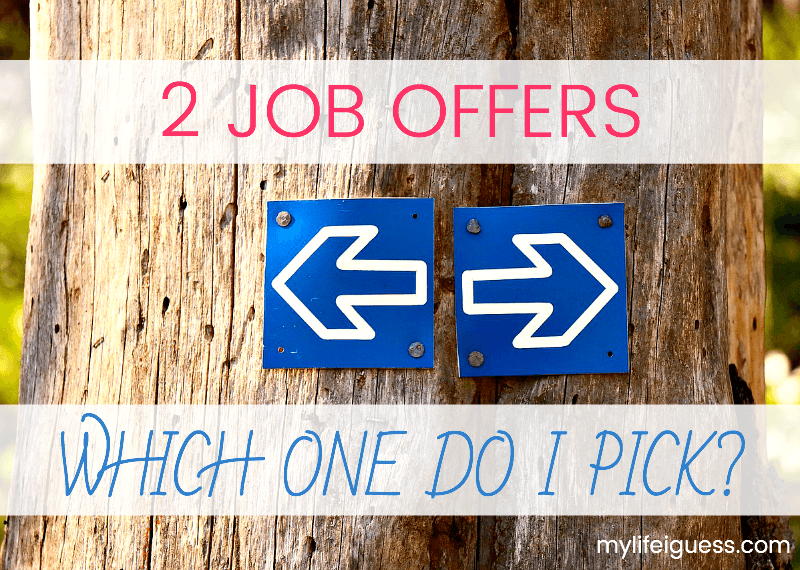 A few weeks ago, I was faced with a problem. A lucky problem, but a problem no less.

I was in a situation I’ve never been in before, and wasn’t sure what I was going to do. I asked people for advice, discussed it at length with R, researched what I could online, and made numerous “pro and con” lists to try to help me make the right decision.

Instead of being rejected (once again) for a full-time job that I was perfect for – I turned down their job offer.

Well in case the title of the post didn’t already tip you off: I was offered 2 full-time jobs at the same time!

After what I’ve experienced these last couple of years – 100s of unanswered applications, dozens of unsuccessful interviews, 3 part-time minimum wage jobs, and an unbelievable amount of stress – being offered 2 great jobs seemed like an impossible dream come true.

I had become too accustom to accepting whatever position was offered to me – part-time, minimum wage, babysitting, whatever. A job was a job. Any income was better than no income. And despite being more than qualified, the job offers were too few and far between for me to be picky. I just took what I could get.

My confidence was shot. My bank account was empty. And I was feeling miserable.

I couldn’t have possibly anticipated that after all this time that I’d actually have a choice.

(Or that I would have turn a job down…)

Although this was a fantastic problem to have, it didn’t make the situation any easier. The stress of just finding any job was suddenly replaced by the stress of choosing the better job.

Both positions were good, but neither one stood out over the other. They both had pros and cons, were very similar pay and benefits, and were jobs I’ve been waiting for all this time.

But I couldn’t accept them both. I had to pick one.

Job A was with a smaller, non-profit educational organization. The job included travelling throughout Northern Ontario doing in-school presentations on career opportunities for high school students.

I’ve always thought my career would be be in the Educational field, and this job would get me back on that path.

I have a lot of experience facilitating presentations, working with schools and students, and working for a non-profit organization.

The interview went extremely well, and the people I met in the process were very friendly. It felt like a natural fit. Like it was something I could jump right into and excel at.

My biggest apprehension was the travelling part. Northern Ontario is beautiful, but it’s also very remote. Some communities don’t even have paved roads, let alone wi-fi or cell phone service.

Although accommodations, mileage and a food allowance would be paid for by the organization, any vehicle maintenance would be coming out of my pocket. I don’t know if my car could handle the wear and tear, or what I would do if I did break-down in the middle of nowhere.

There wouldn’t be much room to advance or move around in such a small company either.

Job B was an office job with the provincial government. The role primarily included supplies management and inventory control within an institutional setting.

Although I’ve never worked exclusively in a role like this before, the main responsibilities are all things that I’ve done before, and enjoyed doing. I would be managing my own department once again, and would basically get to organize things all day.

Working with the government would open up a lot of doors for me. There’d be many opportunities to move around or be promoted, and would include a government pension.

I also know someone who held this exact position years ago, who still works in the same building in a different role. She would be a huge support and invaluable resource to me, as well as a familiar face.

The interview for this job did not go very well, in my opinion. I went in feeling so confident, but left feeling really upset, confused, and crushed. I was pretty shocked when they called to offer me the job.

The job also involves working with people who are in the system. It won’t be nearly as carefree as other places I’ve worked, as I would be exposed to a lot of strictly confidential information on a daily basis.

Which One Did I Pick?

Well, as I already mentioned, it was not an easy decision to make. A one-page job ad and an hour long interview can only tell you so much about a job and its environment. There’s a lot of unknowns, and your imagination can run wild trying to fill them in – both for the good and for the bad.

But in the end, it boiled down to this:

In most of my past roles, I’ve been the big fish. And while it has had its advantages, I didn’t grow in these roles because there was no room to grow. For me, that made the work quickly become boring and repetitive.

The only time I’ve really been the small fish was when I was working at the college. Even though I was only there for a short contract, I learned a lot. I grew a lot. And there was always something new going on.

Taking Job “A” would have been easy. I would have liked it a lot – at first. But I imagine after a year or two of driving to the same schools to deliver essentially the same presentation, I would have been ready to move on. (Not to mention lonely, being away from home that often.) Before long, I’d likely be back in the cycle of scouring job boards, tweaking resumes, applying, interviewing, and potentially being rejected all over again.

Even though it scares me.

But isn’t it about time I found a job that scares me? Something that challenges me? Working in childcare for these last 2 years sure hasn’t challenged me, and I don’t know that Job “A” would have either.

Was it the Right Decision?

Well, it’s too soon to say – because I haven’t started yet.

Even though I accepted the position back at the end of May, government jobs have a pretty lengthy hiring process. I can’t even step foot passed the main office until my back-ground check comes back clear, which can take anywhere from 4-12 weeks. (I wasn’t exaggerating when I said it was a strictly confidential environment!) And then I believe there is even more paper-work to complete.

Normally, waiting for that phone call would leave me anxious and agitated, but I’ve been a little preoccupied with another major life change that’s happening in less than 2 weeks!!

I will admit that I did second-guess my decision momentarily when I told Job “A” that I accepted another job offer and had to decline. The hiring manager’s response was something like “I’m not surprised to hear that you had other offers with how qualified you are” – which kind of broke my heart a little. I’ve had far too many horrible bosses in the past, it was hard to walk away from one that had already been so kind and supportive of me.

Either way, working full time and making a decent income again is exciting!

Since moving in with R, we’ve never both made good money at the same time, and have faced some pretty significant financial hardships because of it. Being able to cover our expenses, pay off our debts, and still have money left over is going to be new for us, and a great way for us to start our soon-to-be married lives together.

Have you ever had two job offers at the same time? How did you decide which one to pick?