If you’ve been paying attention, you’ve already noticed that I broke my new year’s resolution and personal goal of posting at least once a week on my blog.

Although I missed two weeks along the way, I was doing a pretty good job until the middle of May.

That’s when life started to get more complicated and more stressful for me. And blogging became the least of my worries.

Things have started to feel a little more normal again, lately. I’m hoping to get back on track – starting with this post.

But before I dive into my regular types of posts, I thought I’d do a little life update to let you know what’s been going on.

Without getting into it too much, work stuff is mostly to blame for my blogging absence.

Part of me is proud and incredibly fascinated by my line of work, but another part of me is frustrated and exasperated by it.

Learning my new role has been challenging. So, I’ve been doing as much as I can on my own to better understand it. This has included signing up for a mentorship program and several training courses. Most of which require traveling to Toronto.

I was really eager about my first trip back in May and was hoping to learn a lot from it. But instead of feeling more enthusiastic about my new career path, the trip left me exhausted. I really began to wonder if I had made a mistake accepting this job offer in the first place.

(And I realized just how much I dislike flying.)

Needless to say, I had mixed feelings about my second trip in July.  I was a lot less eager to go this time – except for the fact it gave me the chance to meet my 3-week old nephew!

The instructors turned out to be amazing! But I was left feeling really dumb and embarrassed because of how little I knew compared to everyone else – even those that were much newer to the role than me.

When I got home, I started actively (and reluctantly) looking for a new job…

But to my surprise, things at work started to get better. I no longer felt completely stressed out and overwhelmed by the end of the day. Instead, I was calm, I was confident, and I finally felt like I understood what I was doing. After nearly 5 months on the job, it finally made sense!

I still have a lot to learn (and another 4 training sessions booked between now and April), but I know I’ll eventually get there. 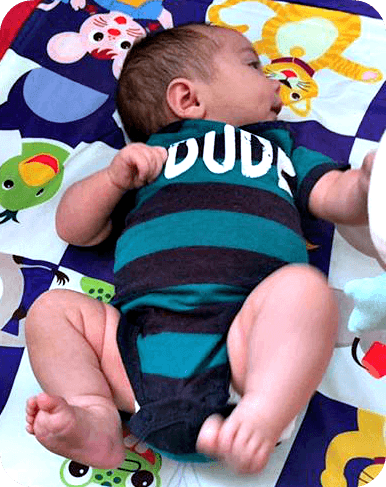 Back in May, we received news that my grandma wasn’t doing so well.

One of my sisters flew up to see me over the long weekend, and we took a day-trip to go visit grandma. Then a few days later, my dad also made the trip up to Northern Ontario to see us both.

My grandma passed away in early July – just days after my other sister’s baby was born. (Ain’t he cute?!)

My husband wasn’t able to get the time off work, so it was another quick trip to attend the funeral. It was great to see a lot of my family even under the tough circumstances, as I don’t get to see them much.

Although these work trips take a lot of out of me, I am happy that they do allow me to see my family – especially now that I have a little tiny nephew to spoil (since I don’t plan to have any little tiny ones of my own). There is no way that I could afford all these flights and I would be lucky to see everyone once a year, otherwise.

For the last couple of months, I’ve honestly felt like a different person.

My brain has been foggy. I couldn’t concentrate and was constantly forgetting things. I started to make the dumbest mistakes and had my first (very minor) car accident when I backed into a pole.

The smallest things started to make me intensely anxious, which triggered the worst panic attacks I’ve ever had.

I started getting migraines again.

And, I had screwed up my knee and stopped going to the gym, to boot.

But what concerned me the most was how angry I felt all the time. I usually get quiet and withdrawn when I’m angry, but this was like a full on I-want-to-punch-my-fist-through-the-wall rage that I just couldn’t shake. Or pinpoint why I was even feeling angry in the first place.

I’m not sure if these problems were caused by all of this “stuff” going on or if there’s another underlying issue that I’ve yet to identify.

But as things at work started to calm down, so did everything else in life.

I’ve been feeling a lot more like myself lately (despite getting the flu yet again!), and things are getting back to normal. I’m trying to take better care of myself by going to the gym regularly, seeing my chiropractor, and (most importantly) by writing once again.

YOUR TURN: How’s your life been lately? Please share in the comments below :)