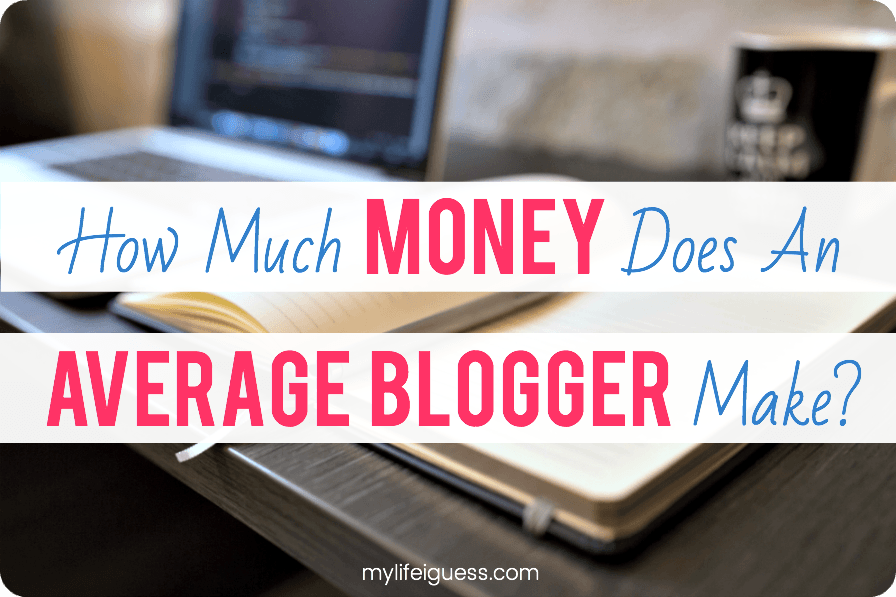 4 years ago, I decide to turn a rarely used little hobby blog of mine into something a little more serious.

While it’s still mostly a hobby blog, I’ve been fortunate to have earned a little (and to have learned a lot) from it.

When I first started blogging, I had no idea that making any money from it was even possible. Now, it seems like every other blogger I follow makes enough money from it to quit their day job to blog full-time.

Unfortunately, most bloggers aren’t so lucky. Most bloggers don’t even earn enough to cover the costs of running a blog. Which is probably why so many quit blogging, instead.

But you don’t really come across those articles too often. I had a really hard time finding any, at least. (Probably because the websites no longer exist.)

You’ll likely only come across articles from or about the highest earners, since they are obviously more prominent.

There aren’t many of us left that fall somewhere in between the two. Bloggers like me, that for simplicity sake I’m going to refer to as “average bloggers”.

We still work our 9-5 jobs during the day, and spend an hour or two blogging at night. Our page views and statistics are modest, but steady. We don’t invest much into our blogs, other than our time.

But we are happy with where we are. We don’t necessarily want to quit our jobs to be our own boss. We just want to share our voices, our stories – and maybe make a little money on side by doing so.

I can’t tell you what other average bloggers are making because as I said, I had a really hard time finding any statistics on it. But I can tell you what I’ve made.

So, in honour of my blog-iversary, here’s how much I’ve earned and spent in my 4 years of blogging.

Please note that the figures below are all in USD.
This post contains affiliate links. (Read my disclosure for more.)

How Much I’ve Spent in 4 Years of Blogging

They say you have to spend money to make money. And while blogging isn’t free, I’m happy to say that I haven’t really spent that much on it.

Not surprisingly, I spent the most money on my website in its first year. I bought 3 years worth of hosting and bought my blog theme. In years 2 and 3, my only expenses were to renew my domain name and I tried using Fiverr for the first time. In the 4th year, I had to renew my hosting plan as well.

My biggest blogging expense is to pay for hosting, which costs me $5.17 a month. I use HostGator and other than a small delay with my initial set-up back in 2013, I’ve had no issues with them.

For new customers who use my code, you can get your domain, hosting, and unlimited email for as little as $3 a month – which is less than what I pay!

My second biggest blogging expense is registering my domain name with NameCheap. I also paid to have my old URL redirect to my new one when I switched from a free blog host.

My first blog theme was found through Etsy. I upgraded the theme once to be mobile-responsive, but otherwise, I used it for over 3 years. My current theme by Sculpture Qode (which I got for free thanks to Creative Market) was the first one I found that had the similar features I was looking for.

I also tried my luck, pretty unsuccessfully, with Fiverr at one point when I was stuck on some branding related work.

I’ve never paid to advertise my blog, but back when I was first starting out, I did participate in a couple of giveaways to help get my name out there. From just one of those giveaways, I more than doubled my monthly page-views, gained over 300 followers on Twitter and gained 50 subscribers. Not a bad return, by any means!

I’ve signed up for an affiliate marketing course, which I managed to snag at a drastically reduced price before it launched. And… I’ve yet to really do anything with it. Hopefully, that will change soon and will be reflected in any future blog income reports?

How Much I’ve Earned in 4 Years of Blogging

I’ll be honest, I didn’t really know what my grand total was until after I had this post half-written. I knew approximately what I made month to month, but I never sat down and added it all up.

Before I break it down further, I wanted to mention that I’m NOT including all the money I’ve made online in this post. I’m only including the money that was earned either through or because of this blog. So anything that I earned from things like answering surveys online or that I won through entering giveaways won’t be included.

Again, not surprisingly, I earned the least amount of money (nothing!) from my website in its first year. I knew nothing about monetization back then and ran my website ad-free. In year 2, I earned my first income through a small virtual assisting job and my first freelance writing gig. In Year 3, I started accepted sponsored posts, which is where most of my blogging income comes from.

I have a strong love-hate relationship with sponsored posts. I get pitches for them constantly, which makes it easy money for me. And when I was desperate for money, I sort of sold my blog short and accepted some low-ball offers and poorly written posts. Now that the desperation has passed, I’m making an effort to focus on other revenue streams.

I’m a slow writer and a bit of a perfectionist. I wish I weren’t so that freelance writing could be more lucrative for me, since it’s usually paid by the article or word count and not by the hour. Since I’ve struggled with regularly creating content for my own website, I’ve been careful not to over-commit myself.

When I first started blogging, I was proud that my website was ad-free. Little did I know that no one even noticed, or cared. So I started using Google AdSense. Like other bloggers will tell you, this is a slow way to make money unless you have a ton of traffic. I only make pennies a day from it.

It took me a while to jump into affiliate marketing in general, but that seems to be where the bloggers make the big bucks. So, as I mentioned above, I signed up for a course on it. So far I’ve been focusing on Amazon.com and Amazon.ca because they are so broad. I’m hoping that once I dive into the course, I can target market a lot better and share products and services I think you guys would like and find more useful.

The first money I made wasn’t actually through my blog, but because of it. Another PF Blogger hired me as a blog commenter, meaning I got paid to read other blog posts and comment on them using her website URL. This type of blogging job doesn’t seem to be in demand anymore, but it did spark my interest in this whole using my blog as a business thing.

Most of the bigger bloggers that publish their income reports make more each month with their blogs than I have over the entire lifespan of mine. And yet, I’m still doing better than most bloggers out there.

While I many not have gained a lot financially over the last 4 years of blogging, I’ve personally gained a lot. Things like friendships, connections, purpose, meaning, confidence, pride and the honour of helping others in the process. Things that you can’t put a dollar value on.

YOUR TURN: Do you make money from your blog (if you have one)? If so, how much do you make?

13 thoughts on “How Much Money Does an Average Blogger Make?”