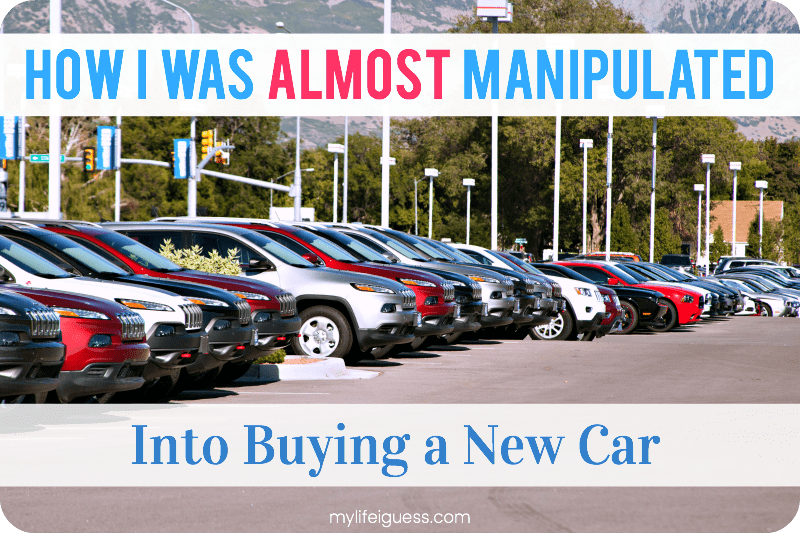 Last week, my car suddenly started squeaking whenever I made a right turn.

The next day, it started squeaking whenever my foot was on the brake.

Before a third thing could go wrong, I called up my car dealership and made a service appointment for the following morning.

I knew I hadn’t been keeping up with the maintenance on my car as much as I should have. Unfortunately, when you’re broke, it’s one of those things that can’t always be a priority. (Even though we rely heavily on the car, as there’s no Uber or public transportation available.)

I braced myself, knowing that there was a very strong chance that this repair bill could be for $1,500 again. Especially with this new squeak.

But my expectation was off. Way off.

And unfortunately, not at all in my favour.

Add a new set of tires and a new windshield, and that total jumps to about $4,250.

My car mechanic knowledge is pretty basic. So when they were coming at me with sway bar this and control arm that, they might as well have been speaking German.

What I did understand was the price tag.

And I definitely understood when they said if I didn’t fix all these things, my engine would explode.

My engine would explode?!?!

Needless to say, I was in shock.

When we got that first $1,500 quote last year, we wondered if it was worth it to put that much money into a 2010 Hyundai Elantra.

But now that there was this hefty repair bill and another 10,000 km on the odometer, I wondered if that were still true.

I asked the dealership what the trade-in value of my car would be.

Of course, they swooped me into the sales office and started asking me all these questions about getting a new car.

What features did I want in my new car? Did I want another red car or maybe blue this time? What monthly payments I could afford? (How about the $0 that I’m currently paying? Got anything in that price range?)

They completely ignored the fact that I wasn’t looking for a new car. I just wanted to know what my car was worth so I could process the numbers and do what made the most sense financially.

I knew that the trade-in value that a dealership would offer me would be a low, wholesale price. And that it would be a lot lower than what I could potentially get selling it privately.

But I almost broke down when they told me my low-milage, accident-free car that was running just fine 3 days ago was only worth $400.

To them, my car was worth the same as the unworn clothes that had just been hanging in my closet.

BTW: the average trade-in value for my car in “fair” condition is actually $3,150 according to AutoTrader. Just in case you were wondering how badly the dealership’s offer truly is.

So I did what I always do when it comes to my car – I called my dad.

My dad, who is a mechanic, spent nearly an hour on the phone with me going over everything. Once I hung up, I felt a lot better about things but realized that my negligence had finally caught up to me.

He did confirm that yes, my brakes and steering needed to be looked at as soon as possible.

However, the majority of all these things that apparently needed to be urgently fixed didn’t. They were simply the things listed on the manufacturer’s maintenance schedule that they suggest replacing around the 80,000 km mark.

More importantly, though, he couldn’t figure out what on this list could possibly make my engine explode. And pointed out that if it really was at a such a high risk of exploding, they wouldn’t have let me drive it off the lot.

He strongly suggested that I get a second opinion.

I didn’t really want to fork out another $60 only to be told the same bad news again, but I am so glad I did!

The mechanic at Canadian Tire said the exact same things my dad did. He even made a joke about how the dealership was trying to give me a heart attack with their quote in order to get me to buy a new car, instead. (He’s probably not wrong!)

So after all of this, I went ahead and forked out $460 to get the brakes (and that initial squeaking sound) fixed, at Canadian Tire. Next pay day, I’ll be spending another $300 to fix the steering.

Buying a new car shouldn’t be something you’re manipulated into doing.

It should be planned, researched and number crunched, because new cars aren’t cheap!

For most people, it’s a significant investment to make. It’s likely another monthly payment to budget for and another 5-figures of debt to take on. Which is something that simply does not work for us right now.

What does work is to spend $300 – $500 a month for a couple of months on these repairs and upkeep. Spending that much on a car loan (for a car we don’t even really want) for the next 7 years, does not.

When I first bought my car (which is the first and only car I’ve owned), it was a fun and exciting experience. I spent months saving up for my downpayment and comparing different features and prices online. I went into the dealership prepared, knowing exactly what I wanted and exactly what I wanted to pay for it.

But there I was at the dealership again, completely unprepared this time, feeling forced into buying whatever new car was the cheapest.

Had I just trusted the service at the car dealership, I would have written off my car as worthless, when it could potentially sell privately for up to $5,300 (again, according to Auto Trader). I would have handed over that potential profit to a dealership that was using scare tactics to try to make even more profit off of me.

I know that maintaining an older car can be expensive. And that buying a new car will be in my not too distant future. But it’s going to be on my terms – and with a non-manipulative dealership.

YOUR TURN: Have you ever been manipulated into buying something you didn’t need?

For the car owners, how old is your car? When do you plan to replace it?

Let us know in the comments!