Skip to content
Table of Contents Show
Management Lessons Learned
The Leadership Lessons Learned. A Gift From Frank.
The Truth Hurts
The Peter Principle
What is the Peter Principle?
Moving Beyond My Ceiling to Quadrupling Profits
The Vision
Peter’s Plateau Surpassed. Mission Accomplished
Jeff Wiener
This post may contain affiliate links, meaning I may earn a small commission if you make a purchase using my links, at no extra cost to you. I truly appreciate your support! Please read my disclosure policy for more.
Tweet1
Pin2
Share
Share
More
3 Shares

By Jeff Wiener @ The Kickass Entrepreneur

Who would have thought that one of my favorite employees resigning would be among the most valuable leadership lessons I needed to quadruple profits, and would become the catalyst for me selling my business?

I started my small business fresh out of college in 1991 at the age of 23.

Other than a three-month gig, I had never really worked for anyone or had a formal job. I’ve been self-employed my entire life, and for the most part, the leadership lessons I’ve learned over the years was through “on-the-job” training.

Unfortunately, I started the business on a shoestring budget, and by my sixth month in business, I was down to my last few hundred dollars, literally days from closing the doors.

I managed to hold on, month to month, for at least the first couple of years, barely eking out some positive cash flow.

In the early years, I looked after everything: from sales to marketing and accounting to technical support. I even cleaned the toilets. I regularly worked 70 to 90 hours a week for the first five years, often sleeping in the office and rarely, if ever, taking a day off.

Fast-forward many years later (October 2017 to be exact) and I had successfully closed on the largest transaction of my life when I sold my 50-employee business to private equity.

I’m now in the fortunate position, at the age of 51, to be living the life I imagined when I was a young and somewhat clueless 23-year-old entrepreneur.

Those early years growing the business were challenging. Not only because it was hard to find sales and cash flow was so tight but, most importantly, because I had never really managed anyone other than myself.

What I know now is that one of the keys to building a successful and thriving business, and ultimately wealth, is predicated on how well the business owner can get out of the way and successfully manage and lead the business’s team.

The better the business owner learns to do both, manage and lead, the more successful the business.

You see, I didn’t understand the concept of management and leadership. Instinctively, I knew that to grow, I would have to become a good manager. But because I had never really worked for anyone, I didn’t truly understand what it meant to manage and lead people.

In my earlier days, I had a tough time letting go, and that makes sense because I looked after pretty much everything. As a result, I knew and understood the business better than anyone else.

Often, it was easier for me to do something myself than wait patiently for my staff to figure it out. Rather than spend the time to teach someone how to do something, I would do it myself.

I know I was a difficult boss, and frankly, I didn’t really listen all that well. It wasn’t until my later years running my business that I learned what it meant to manage. Only once I began to delegate did the business start to grow effectively.

There was a specific incident that happened in 2013 that was pivotal in my personal development. That incident was the catalyst that helped move me, and my business, to the next business level.

The leadership lessons I learned through one event in 2013 was what ultimately helped propel my business to more than double sales and quadruple profits inside of four years.

The Leadership Lessons Learned.
A Gift From Frank.

One of my favorite staff members left me a gift.

Typically when one of your favorite staff members quits, that’s not a reason to celebrate. In this case, I wasn’t celebrating his resigning. I was quite disappointed.

Here I was, thinking that this particular staff member (let’s call him Frank) liked working for me and my business.

Frank came to my office, resignation letter in hand.

Fortunately, we spoke about why he was leaving. He provided me with a list of things I was doing wrong and things that were wrong with the business.

Usually, I wouldn’t have listened, but in this case, Frank had some valid points.

Related Post: What To Do When You Hate Your Job

He said the business was disorganized. Working for me was like drinking from a firehose. The company was missing any formal sort of business structure, and people weren’t sure of their work duties because no one had any formalized job structure or responsibility. For the most part, everyone did everything.

The business needed an operations person. I operated in that role. Honestly, I was doing a pretty lousy job. Also, he said that the company lacked formal leadership.

Fortunately, he had provided his notice just before the New Year’s break, and I had a week to think over and reflect on his comments.

I came to realize that sales had been more or less stagnant for the prior few years because I was getting in the way too often. The skills I had brought to the business were the skills that allowed us to grow to 30 employees. Those skills weren’t the same skills required to expand the company any further.

It took the incident of Frank resigning to make me realize I was holding my business back, and unless I started managing differently, the company would remain stagnant. Frank was my leadership lesson.

There’s a term for what I just described.

What is the Peter Principle?

The Peter Principle was a term coined by business management guru and author Laurence Peter.

In his book, The Peter Principle, Peter observed that people in an organization “rise to their level of incompetence.”

The principle says that people will expand into their roles, up to the point where they reach their ceiling. And unless they make some changes to their methodology and process, they will likely remain stuck there.

The point at which the individual feels stuck, the ceiling, is called Peter’s Plateau.

Every individual has their own Peter’s Plateau. Unfortunately, most of us don’t realize we’ve reached ours, and until we do, and until we make changes to what we do and how we operate, we won’t progress beyond our ceiling.

Moving Beyond My Ceiling to Quadrupling Profits

By the time I got back to work in early 2014, I had reflected on what Frank had said and why he resigned. Frank had more or less laid out a clear path forward for the business.

And therein was Frank’s gift.

Within three weeks, we hired an operations manager and promoted one of our salespeople to sales manager.

I moved out of sales and started working on creating a vision for the business.

For the first time, there was a formal business plan. I put together a management team and learned how not only to manage but how to lead my business.

I created a BHAG (Big Hairy Audacious Goal) and communicated that to our team in the form of a State of the Union meeting.

I created a vision that everyone in the company could get excited about.

I began to appreciate that, if I were to try to micromanage everyone’s job, then nothing would get done. So we spent money and time on making sure everyone in the business was getting formal training.

I set up one-on-one meetings with my direct reports.

By late 2016, ahead of schedule, we had accomplished our goal of doubling the business and, meanwhile, quadrupled profits.

Ultimately, I decided to sell the business, not because it wasn’t doing well, but because I wasn’t enjoying the challenge of running a company. After 27 years, I was done and ready for a new challenge.

On October 16, 2017, I stood in front of the team, this time as a leader of the business, leadership lesson in hand, much in the same way I had four years prior during our first State of the Union, and announced to everyone that I had sold the business. It was bittersweet. I had sold my baby.

I accomplished my goal, thanks to Frank. Had he not handed me his letter of resignation in late 2013, and had we not had our exit interview, I likely would never have made any of those changes.

The changes that we needed to make were so obvious, and yet they weren’t.

That’s the thing about the Peter Principle and your Peter’s Plateau. Hindsight is always 20/20.

When you’re busy running your day-to-day, doing the same things over and over, we often don’t stop to consider that maybe we’re the reason why our business isn’t succeeding or why we’re constantly passed over for promotion.

It doesn’t matter whether you’re running a small, solopreneur legacy book company, a 200-person AI software company, or managing a large team inside a multinational. Every single one of us has their own Peter’s Plateau.

Until you find yours, don’t be surprised if you keep doing the same things over and over again, expecting a different result. If you’re not achieving your goals, maybe you now know why.

This article originally appeared on The Money Mix and has bee republished with permission. 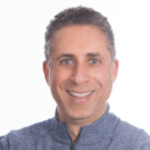 Jeff writes a weekly blog on The Kickass Entrepreneur, a site focused on helping entrepreneurs expand their business, improve profits, and create wealth. Jeff ran his business for 26-years, sold to private equity for 8-figures in 2017, and semi-retired at the age of 49. Throughout the years, Jeff built a portfolio of apartment buildings that he continues to manage until today. You can subscribe to his weekly blog posts.

Hey there! I’m Amanda, an older millennial from Ontario, Canada where I ambitiously try to live a life worth blogging about. I strive to keep the “person” in personal finance by writing about money, mistakes & more. This is the story of MY LIFE, I GUESS…

50+ Self Care Gift Ideas For Under $50 (Updated for 2020)
Stress Leave: Am I Really Sick or Just Looking for an Easy Out?
What Should I Do To Build My Online Business?
Don’t Let a Horrible Boss Destroy You (Like I Almost Did)
How Being Unemployed Helped Me Get an Awesome New Job
What To Do When You Can’t Find a Job
15 Ways to Survive Financially While Unemployed
Take the Perfect Gift Guides Course: Start Earning Real Money with Affiliate Marketing!
Practical Gift Ideas for the Unemployed in 2020
How To Actually Make Extra Money Online In Your Spare Time