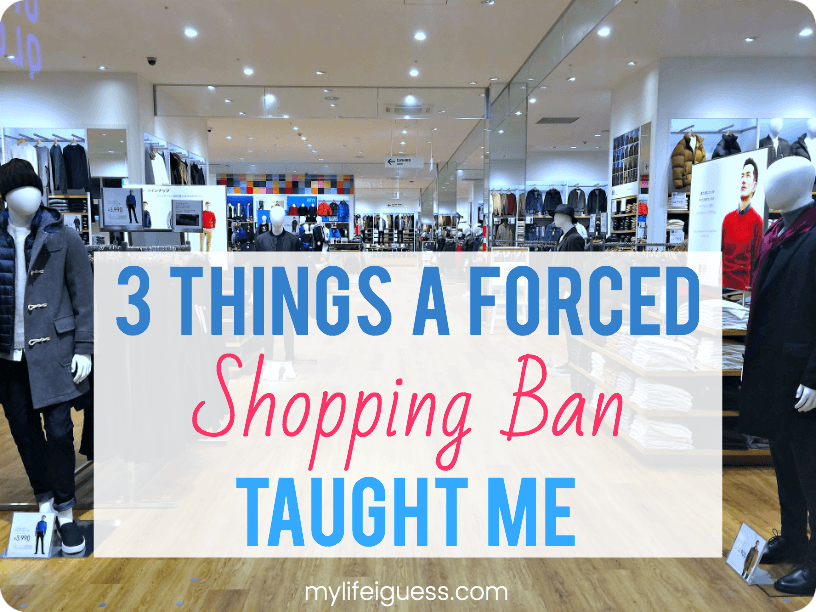 If you read personal finance blogs, I’m sure you’ve heard of Shopping Bans before.

Cait Flanders really brought a lot of attention to the concept back in 2014-15 when she completed a year-long shopping ban. (And then she did it again for a second year. And is now writing a book about it.)

The “rules” of a shopping ban are simple – don’t buy anything other than the necessities for a specific amount of time. Instead, use the items you already have, borrow them, or simply go without.

The goal is of course to spend less and save more money, but the benefits are greater than just that. It can change the way you think about money and the need to buy things. It can help you break any negative spending habits you have by making you aware of what your spending triggers are. You can learn to be more appreciative of what you already have and become a more conscious consumer.

I was forced into a shopping ban after being laid off and unable to find a full-time job for over 2 years. I simply could not afford to buy things. Even when they were things that I actually needed.

I was jealous of everyone who chose to go on a shopping ban. They were doing it to make things better for themselves, while things were getting worse for me.

Regardless, I was recently reminded of how I benefited from this experience more than I ever could have imagined I would.

The lessons I learned from my shopping ban have stayed with me. In fact, I’m still learning more from it every single day.

1. Having Too Much Stuff is Stressful

I already have too much stuff.

You probably do, too.

When my now-husband and I first moved into a 3-bedroom townhouse together, we each claimed a spare bedroom. I used my room as a home office and he used his room as a music studio. But storage space in our place is seriously lacking. Before long, we had to shuffle everything around. We moved our bedroom into his music studio, use the master bedroom as a joint office/music space, and my old office has become a storage room.

And guess what? We almost never go in the storage room. There are boxes in there that have never been unpacked from when we first moved in over 3 years ago.

There have been a few times where we needed something that we just so happened to have in storage, but for the most part, this hasn’t been the case. And it’s never been anything worth more than a few dollars.

Our storage room causes me a lot of stress. A lot more than those few dollars we didn’t have to spend are worth.

So why would I want to go out and buy even more stuff? I need to assess what I already have and either get rid of it or start using it.

Not being able to buy new things makes you a lot more resourceful.

Recently, I was reminded of this whole shopping ban thing when my relatively new windshield wiper broke off. While I was driving. On the highway. In the middle of an ice storm.

I honestly though I’d have to pull over, call CAA and hope that I wasn’t going to have to wait hours for them to show up. Thankfully that wasn’t the case.

My husband truly MacGyvered the windshield wiper back together (in every sense of the word) in a parking lot using my hair elastic and two bobby-pins. Not only did we get home safely thanks to his quick-fix, but it’s still holding on just as strong as before.

I applied this same idea numerous times through my involuntary shopping ban. (I can’t tell you have many times I gorilla glued my old winter boots and our coffee table back together!)

And I’ve continued to fix things whenever I can, even when I can afford to replace it.

3. Sometimes, I’d Rather Go Without

After years of pinching pennies and being banned from shopping, I would have thought I’d blow at least one of my first pay cheques buying all the things I couldn’t afford when I was unemployed.

I had been keeping a wish list, after all.

But even after being back to working full time for almost a year, I’ve only bought 2 things from that list – new winter boots and a new winter coat. And that’s only because they had become things I needed. (I still waited for them to go on sale.)

I’ve never been a big shopper, but I used to go shopping a lot. I lived alone and I’d use it as a reason to get out of the house. And I would end up buying things that I didn’t really want or need.

I no longer feel banned from shopping, but I do feel burdened by it.  It’s something I avoid to the point where sometimes, I’d rather go without than go shopping.

Although I was forced into my shopping ban, I’m grateful that it happened.

My relationship with money and things have changed dramatically because of it.

Paying down my debt and filling up my savings account is far more important to me than having shiny new things. I know I can survive just fine without more stuff.

YOUR TURN: Have you tried going on a shopping ban before? If so, what did you learn from it? If not, what’s stopping you?

5 thoughts on “3 Things A Forced Shopping Ban Taught Me”