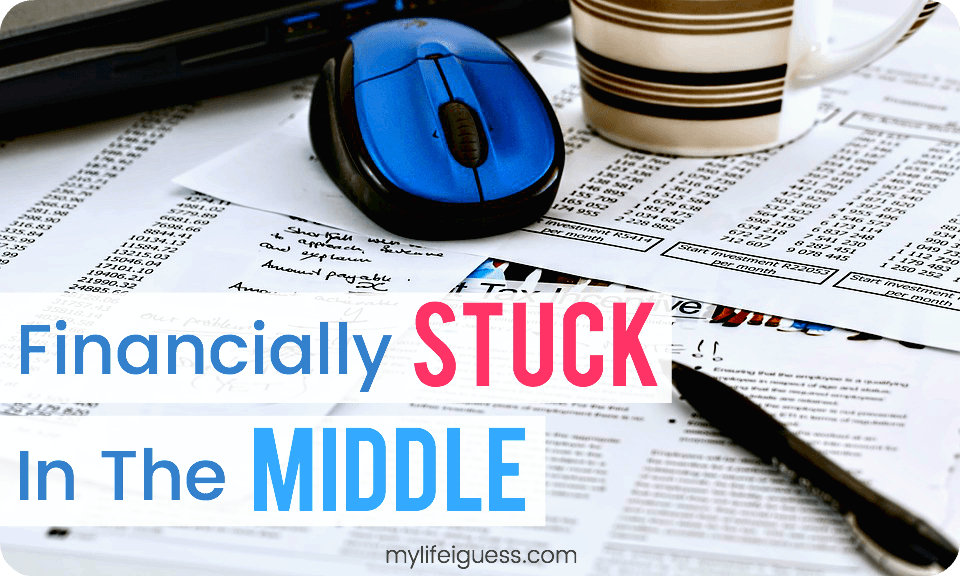 Recently, I celebrated my one-year anniversary of being back to work full time.

In some ways, it feels like I’ve been with this organization for a lot longer than that. I have already changed roles after accepting an internal promotion and am currently back-filling for a different department, as well. (Essentially meaning I’ve been trained in 3 different jobs already.)

And yet, I still feel so new at the same time.

When I realized that my work anniversary was approaching, I started to look back on the progress we’ve made financially over the last year.

Surely being back to work full time (and more than doubling my income) meant that we’d be getting back on track, right?

Compared to where we were before I started this job, we’re not any further ahead…

But on the bright side – we aren’t any further behind, either.

We seem to have found ourselves right in the middle.

Being financially stuck in the middle isn’t a terrible place to be in.

We’re no longer behind on our bills – but we’re still living paycheck to paycheck.

We still can’t afford all the things we want – but we can now afford at least some of them.

But paying $500 a month in interest charges – just to stay in debt – is a terrible place to be in.

How can we ever get un-stuck from this situation?

Nearly 25% of my net income is going straight into the hands of the big banks, instead of into mine.

That $500 a month could be put to much better use.

If, for example, that $500 were going towards the principal amount owing on our credit cards instead of the interest amounts, we could eliminate all of our consumer debt in under 5 years. We’d be “debt-free” except for my student loan. And could finally make some real progress towards our future.

At our current rate, we will always be carrying this debt load.

I knew we weren’t making any grand strides financially, but I honestly thought we were at least making baby steps.

Realizing we weren’t weighed heavily on me.

I started having panic attacks again, couldn’t sleep, and I was angry and ready to snap.

The stress of it all was quickly taking over my life.

As hard as it was, I knew I had to take a step back from all things personal finance for awhile. (Which also meant taking a break from blogging.)

I needed to calm down, clear my head, and come up with a plan.

Our financial situation is not unique by any means.

And neither is its solution.

We need more money to pay down our debt.

But of course, that’s much easier said than done.

I’m still exploring every option I can think of in order to find a plan that works for us. So far, I haven’t found one.

I’ve talked to two different banks to see if they could help (they couldn’t). I’m chipping away at every item on our budget trying to find an extra few bucks wherever I can.

I recently volunteered to work 12 hour days during the week and over the weekend in order to get almost 30 hours in overtime (which rarely happens in my job). My husband has been accepting more overtime at his job, as well.

I’ve been using my downtime to answer surveys and enter contests online again (I had a lot of luck with these before!).

And for the first time in my life, I’m actually spending time really assessing myself and my career goals, in the hopes of finally finding the right career for me.

YOUR TURN: Have you ever been financially stuck in the middle? How did you get un-stuck?

9 thoughts on “Financially Stuck in the Middle”