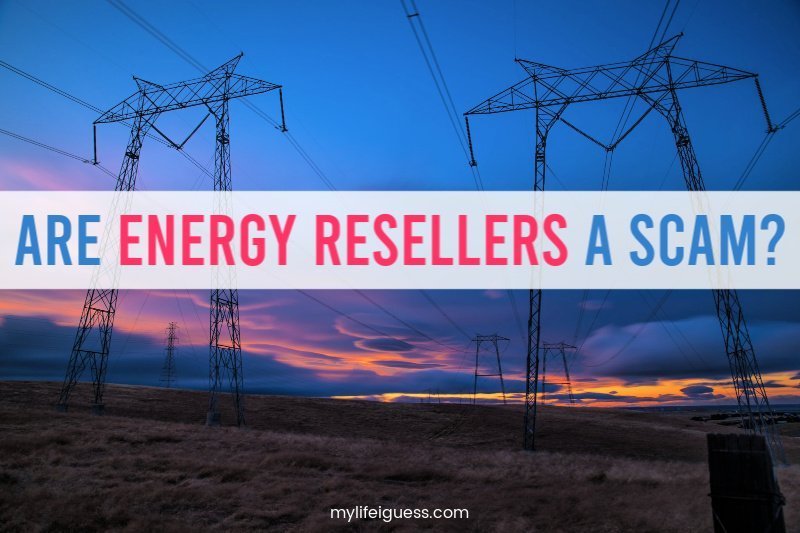 A few years ago, shortly after my now-husband and I first moved in together, we had a representative from Summitt Energy come knocking on our door one evening.

The rep quickly introduced himself and showed me an official-looking ID card that matched the logo on his jacket.

Since we had brand new utility accounts, we both assumed that this rep was there to do some sort of verification or check. So when he asked to see our most recent hydro and gas bills, it didn’t really dawn on me that this wasn’t a routine visit from the utility company.

It was a sales pitch.

And potentially a scam.

What is an Energy Reseller?

For those of you that don’t know, Energy Resellers, Energy Retailers or Energy Sellers are basically door-to-door wholesale salespeople. They sell natural gas and electricity at a fixed rate, claiming that the fixed rate will save you money.

But of course, if it sounds too good to be true, it probably is.

As the rep looked over our bills, he started talking about a huge discount that he could offer us. Neither of us knew much about energy resellers and his sales pitch was so good that we weren’t suspicious or alarmed in the slightest.

I don’t recall the exact figures he gave, but the proposed savings were significant enough to pique my interest. And after about 10 minutes or so, I was foolishly signing his forms.

However, I didn’t know I was signing a contract.

I was lead to believe that I was simply signing a “disclosure statement”. Something to verify to his managers that he had gone over all the details with me. This was reinforced when he placed a “quality assurance” call to his company. I was asked to speak to a woman to verify that yes, the guy had on an ID bag, and yes, the guy read over the disclosure forms with me, and so on.

After I had hung up the phone, we had to wait to for someone from his company to call back.

As the rep was standing in our living room chatting away with me, my husband finally started to become a little suspicious of what was going on.

Why did I need to sign anything at this point?

Who did I just talk to on the phone?

What were they calling back about?

He quickly Googled “Summitt Energy” and it was ALL red flags.

So he spoke up and asked the rep why all the search results were warning that this was an energy reseller scam.

The rep quickly dismissed this, saying that the negative feedback was “just from random bloggers” (you mean like me?) and that we should check out more reputable sites, such as the Better Business Bureau.

Once the sales rep left, my husband and I spent the rest of our evening researching energy resellers and reviewing the paperwork that he had left us.

Not only were my fellow “random bloggers” right, but it turned out that the company was not accredited with the Better Business Bureau either and had numerous complaints listed against them. (Maybe the rep should have done his own fact checking first?)

Did We Just Fall for an Energy Reseller Scam?

A common complaint that kept popping up during our research was that the representatives from reseller companies like Summitt Energy misrepresented themselves.

Most people (myself included) were led to believe that the reps either work for or are closely affiliated with our current hydro and gas companies. In our case, the rep kept saying that our utility companies actually purchase gas/energy through his company. So by signing up with them, we’d simply be cutting out the middleman.

The more disturbing complaints were from the customers saying that by signing up with an energy reseller, they actually ended up paying more.

There was more than enough evidence indicating that this was yet another energy reseller scam.

We decided not to take our chances.

We Immediately Cancelled Our “Contract”

The first thing I did the next day was call Summitt Energy and cancel any contract that was opened under my name. After I hung up the phone, I emailed them to get a confirmation in writing that I did not have to pay a cancellation fee and that my electricity and natural gas services would continue without interruption. I also phoned my utility companies to make sure nothing changed on my accounts with them.

We were lucky that the cancellation process was just that easy for us.

A lot of people weren’t so lucky. Numerous requests to cancel accounts went unanswered. Or customers were told they had to pay outrageous penalty fees in order to get out of their contracts.

But sure enough, about a year later, we got another knock on our door one evening from another energy company. This time I was better prepared, and immediately recognized the sales pitch for what it was.

Before she could even fully introduce herself, I asked if she was with an energy reseller. The rep sort of grinned but didn’t confirm anything. I politely said “no thanks!” and shut the door.

In January 2017, new rules came into effect under the Ontario Energy Board regarding energy resellers which help to further protect consumers in Ontario.

But it’s still happening. Unsuspecting people are still being deceived.

Many states and provinces have no protection at all.

And now criminals are also jumping on the energy reseller scam bandwagon. They pose as utility company employees, demand payments, fish for personal information, or try to gain access to your home.

This is no longer just happening door-to-door either. Scammers are also trying to scam through phone calls and emails now, too.

I feel like I’m pretty savvy when it comes to spotting potential scams, but I (nearly) fell for the oldest trick in the book.

We all know that there are scammers out there, and that they are getting smarter and more convincing each day.

So if someone calls you claiming to be from your utility company, demanding you pay them or else they’ll cut off your services – DON’T DO IT. Especially if they ask to be paid with a prepaid card, gift card or bitcoin. Don’t give out any personal information. Hang up. Call your utility company directly if you have questions or just want peace of mind that everything is fine with your account.

If someone comes to your door, unsolicited, and tries to sell you something or tries to get you to sign something – DON’T DO IT. If you are actually interested in what they’re offering, don’t let them bully you into deciding anything on the spot. Ask them to leave information so that you can do your homework first and make an informed decision.

It could save you from falling for a scam.

Do you have any experience with energy resellers? Have you ever fallen for an energy reseller scam? Or any other scam? Please leave a comment and let us know!

2 thoughts on “Are Energy Resellers a Scam?”