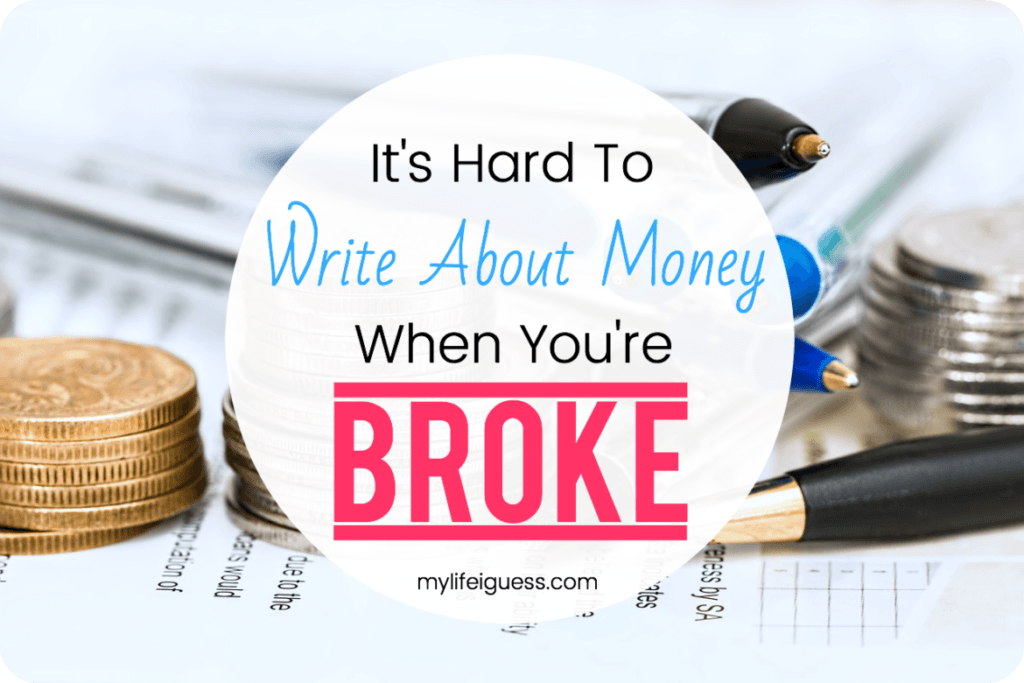 If you’ve been a reader of My Life, I Guess… for a while, you’ll know that I’ve never really been good at posting regularly here. As much as I tried to be one of those bloggers that have a new post every Monday, Wednesday and Friday, I’ve never been that person.

Perhaps you’ve noticed that lately, I’ve only gotten worse. As in, I published only 9 posts in 2016.

Because it’s hard to write about money when you’re broke.

Although I started My Life, I Guess… as a place to simply write about my life, personal finance was always a big part of my blog. Money, in one way or another, is what has driven and kept this blog alive for the last 3+ years.

I don’t even remember how I first stumbled across the Personal Finance blogging world, but the more I read about it, the more I started to write about it. I began consuming and following the advice of other PF bloggers by taking my money more seriously.

I was also inspired by them to take this blog more seriously. Instead of complaining about my former crappy job and my massive amount of debt, I started sharing my own personal finance stories and offering my own advice on what I was doing to try to make my life better.

Slowly, my life did get better.

I quit my toxic job and started working at the college. I was making a lot more money which made me excited to pay down my debts and excited to write about it. Then I met and moved in with my now-husband, which I also wanted to brag about online. Generally speaking, I had a lot more to share.

But then I was laid off. I wasn’t rehired. I couldn’t find a meaningful or well-paying job. I was suddenly making less in a month than I had been making in a week.

At first, the new challenges of unemployment and having no money provided at least somewhat interesting content. Sharing that part of my story was therapeutic. I got a lot of support from my friends and readers and had some of them share their struggles with me. It helped me work things out in my head. It helped me stay hopeful for the future.

But months quickly became years, and I had nothing new to say. The longer I spent unemployed or underemployed, the more useless I felt.

I couldn’t think about money anymore.

I couldn’t read about it.

I couldn’t talk about it.

I definitely couldn’t write about it.

How could I go online and read about my peers and my friends buying houses, quitting their jobs, and accomplishing all these amazing financial and career milestones when I was sinking further and further into debt? When I was day-dreaming of finding a “9 to 5” job and not running away from one?

How could I maintain a blog about personal finance when I basically had no finances? When months went by where I was lucky to make $700 and we purposely had to decide what bill not to pay?

How could I participate in a community (as supportive as it may be) when I felt like an outsider? Like an imposter?

Every small burst of interest or motivation I had to write quickly turned into a pity party. Every draft turned negative. I’d end up deleting everything I just wrote, eventually giving up and walking away from my computer in a jealous rage.

If it hadn’t been for R, things would have been even worse. I could have easily ended up having to sell most of my belongings and move back in with my parents. Even though I contributed every cent I had towards “us”, it wasn’t enough. R kept a roof over our heads and food on our table. Not me.

It was – and still is – extremely embarrassing to admit that. I didn’t want to publish my struggles and my failures online for all to see.

So I started avoided my blog and my computer entirely.

I let my depression and self-pity ruin something that used to be fun for me. Instead of productively “wasting time” by writing, reading, and participating in this community, I just wasted time watching hours of Netflix or playing Candy Crush.

The Future of My Life, I Guess…

Okay, I’m sure at least a handful of you jumped down to read this section first, am I right?

You’re probably expecting me to say something like “this will be my last post” or that someone else will be taking it over. I’ve seen it happen far too many times from other bloggers, all for reasons I completely understand.

But don’t fret – that’s not what I’m going to say!

In fact, I’m saying the opposite.

You see, I’m no longer “broke”. I’m still not rich by any means either, but money doesn’t feel like an overwhelming burden to me anymore. Even though I’ve fallen way behind and feel like I’m starting over again in many ways, there’s a sense of optimism behind it all.

Ironically, what really changed my perspective wasn’t from the relief of finally getting a full-time job again. It was being denied repayment assistance with paying back my student loan.

Up until this point, I’ve been lucky enough to qualify for repayment assistance which gave me a reduced “affordable” monthly payment. But since I recently got married, they include my husband’s income in their calculations now, which meant my latest application was denied.

When I saw the amount they expected me to pay back each month, I seriously thought I’d have to get a second job. It was more than I had been making each month when I was nannying! And their calculations didn’t account for the fact my husbands hours vary significantly each month, or that we’ve accumulated other debts during my unemployment.

But taking on a second job would, of course, create issues for us as a one car household. The last thing I wanted to do was go back to working 60+ hour weeks, only to use the extra money to pay for cabs. It didn’t make any sense.

And then, out of nowhere, my blog suddenly had a major spike in income. In the span of 2 weeks, with no real effort of my own, I made almost $300.

That’s more than I likely would have made working a part-time minimum wage job. And is SIGNIFICANTLY more than I typically make from my blog.

So I thought, instead of working a part-time job for someone else, why don’t I work for myself?

I know, I know… I’ve tried that before and it didn’t really pan out. I lost my momentum before it even really got going, so why would this time be any different?

Well, I was desperate then. I wasn’t writing to share my story or to offer advice, I was writing for the sole purpose to make money. I accepted low-ball offers for poorly written sponsored posts. I tried (unsuccessfully) to promote any product or service that could lead to an affiliate sale. I sold myself and my blog short, just to make an extra 3 cents off of Google ads.

Thankfully, I caught a bit of a break and was able to change my student loan payment to interest only. That took a lot of the immediate pressure off, and allowed me to focus on paying off the debts with the higher interest rates first.

But the motivation was still there.

Yes, I still want to make money from blogging, but we’ll survive just fine if I don’t.

I’m really more interested in the entrepreneurial side of it. I want to make a name for myself and my “brand”. I want to create something that helps me grown and helps me feel successful. I once again want to blog simply because I want to blog.

And those are two very different approaches.

For the last year or so, My Life, I Guess… was an obligation, a chore, another place for me to fail. But now it’s a choice, a productive hobby, a place for me to succeed.

I’m excited for the future of My Life, I Guess… (and my life too, I guess)! I cannot wait to share my stories with you, once again.

YOUR TURN: Has a hobby or interest of yours ever turned into a chore? How did you make it fun again?

16 thoughts on “It’s Hard to Write About Money When You’re Broke: The Future of My Life, I Guess…”