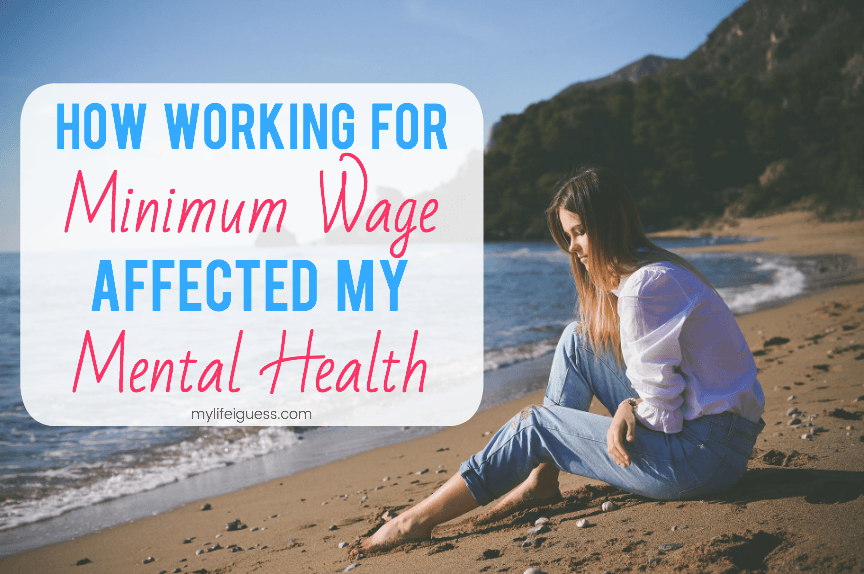 As a university-educated woman in her 30s, with a post-graduate degree and over 10 years of professional working experience, having to accept a minimum wage job felt like a slap in the face.

I’ve spent most of my life getting a quality education, working hard, and gaining tons of experience in order to avoid being stuck in a low paying, no-room-to-advance type job.

I don’t want to be paid the same minimum wage as a 16-year-old with no experience, and I shouldn’t have to be.

No, I’m not “entitled” to something better. I’ve worked damn hard for it!

But yet, I found myself once again at the bottom of the ladder. In a place I haven’t been since I was that 16 year old with no experience.

I realize that my struggles to find meaningful employment has a lot to do with where I live. The economic state here isn’t the greatest and I’m a white-collar employee trying to find work in a blue-collar town. Regardless, it’s hard not to take it personally.

It is extremely frustrating (and sometimes even demeaning) to work for a manager who doesn’t understand the job and who has less management experience than I do. Particularly when you work along-side students who have never had a real job before. It’s even worse when the work is physically and mentally harder than most of my previous jobs, but barely pays $250 a week.

I loved working with kids again, and some of my coworkers were amazing. But overall, working in the daycare of the gym as a semi-glorified babysitter was not where I wanted to be.

I was miserable. I was making people around me miserable.

The state of my health was miserable.

As I’ve mentioned before on my blog, I caught a cold within the first few weeks of work, which never really went away. (Except for when it was replaced by the flu or allergic reactions.) Calling in sick was often a problem. So I didn’t get the time off that I needed to recover, which I’m sure only exasperated the illnesses.

I was constantly taking cold medicine (which is so bad for you to take long-term). I either wasn’t sleeping at all or was sleeping way too much (which also can be bad for you). And my migraines returned, amongst all the other illnesses and symptoms.

The stress was becoming overwhelming.

I started to feel myself slipping back into a depression, and I knew that something had to change. I couldn’t risk facing yet another break-down from a toxic work environment. Especially when I was fortunate enough to have the option of quitting. (I know most people in similar positions don’t have that choice.)

Which is why I finally quit my job working at the daycare.

Well, I should say it’s a part of why I quit. Because trust me, I did not make that decision lightly.

I spent months going back and forth on what I should do. In that time there were many conversations with R (as obviously, this affects him as well), too many failed attempts to find something better, and a whole lot of number crunching being done.

I’d either convince myself that I survived a lot worse at my previous job and that I could survive this. Or that it was ridiculous of me to give so much of myself to this job for so little. But every time I would come to a decision to either stick it out a little longer or quit immediately, something in my gut made me doubt my decision, and I’d be right back to square one.

Then one day, everything changed.

It was the day that we realized my cat, was dying.

Maybe it’s dumb, but to me, it felt like this was the (heartbreaking) sign I’d been waiting for. It was like everything came crashing down. The universe was telling me that it was okay to quit.

It was a cruel reminder that life is too short.

It’s already been over a month since I quit. Although I’m not exactly proud of it, I have not once regretted my decision. But I also don’t regret taking the job in the first place. It didn’t really add anything to my resume, but I absolutely learned from this experience.

It’ll be more of a challenge financially speaking until I get another job, but we can survive without it. We already survived last summer on less. And so far, because we don’t have to spend $40 – $200 a week on cabs as a one-car household, we’re pretty close to breaking-even, anyways.

I’m still applying for as many jobs as I can and doing what I can to make extra cash, but it feels a lot more burdensome. My health and mental health are a lot better, but I still feel like I’m in “recovery mode” more than I’d like to admit to. All I can do is take it one day at a time, and remember that slow progress is better than no progress.

There’s a common phrase that states “no job is beneath you”, but at what point is that not true?