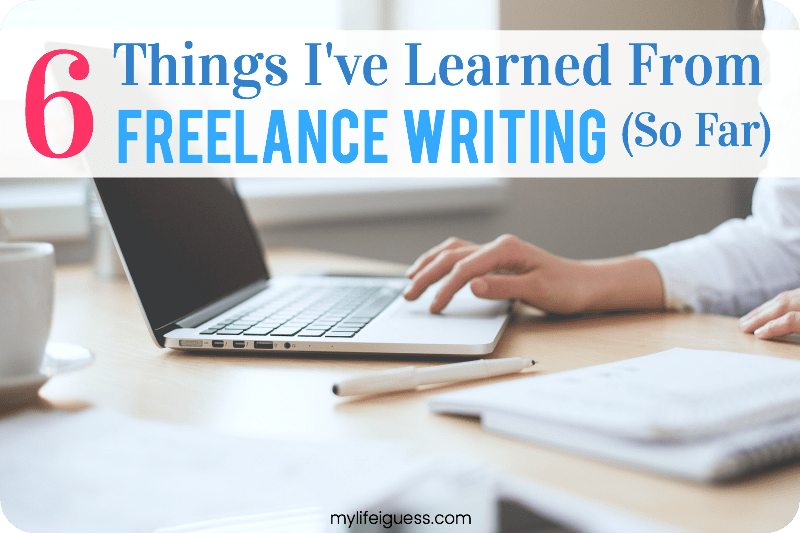 The blogosphere is full of posts and articles telling you that freelance writing is a great way to earn a little extra money from home. There are many bloggers that have been able to quit their day jobs and make a living from it.

But for every blogger that finds that level of success, there are dozens (maybe even hundreds? thousands?) of bloggers that are lucky to make $15 per post.

I’ve been dabbling in freelance writing myself since I launched this blog back in 2013. But it was a lot harder to land my first client than I thought it would be. I ended up guest posting at first instead. Partially because I wanted to gain the experience and exposure, but also because I had no idea how to go about finding paid freelance work. The only opportunities I could find were from content mills that weren’t willing to pay more than $5 per article. (Thanks, but no thanks.)

Penny of She Picks Up Pennies wrote a fantastic article on this very thing last year, titled “No, I Don’t Want Your $15 Writing Job“. In the article, she writes:

“Low-paying writing gigs benefit just about everyone besides the writer.“

Which really resonated with me because, you guessed it, my first freelance writing job paid $15.

Even though it’s only ever been a side hustle for me, I wanted to share some of the things that I have learned from freelance writing so far.

1. Know What Your Time is Worth

A big reason I initially accepted a $15 freelance writing job was that I was unemployed. I had a lot of free time on my hands, and making $15 was better than making $0.

It also helped that I was writing for a friend and writing on topics that I already knew about. So even though I spent a couple of hours on each post, unfortunately, my time wasn’t worth much else.

But that changed when I returned to work full-time. Spending another couple of hours at home in front of a computer after staring at one all day just wasn’t worth $15 to me anymore.

If you can knock out a post in an hour or less, $15 isn’t so bad. If that post takes you 5 hours to write, however, it isn’t so great.

But it’s not up to me or anyone else to decide what your time is worth. Only you can decide that.

While unemployed, my blog and online side hustles (such as freelance writing) helped keep me sane. It gave me a purpose and it gave me something meaningful to do, too. But other than the odd deadline that I wasn’t quite ready for, I only worked while my husband was at work so that we could spend time together when he was at home.

So take into consideration what you’re sacrificing when you spend your time writing. Missing out on quality time with your friends or family might not be worth it. Neither is sacrificing a good night’s sleep, in my opinion.

But writing and making some extra money instead of mindlessly playing Candy Crush on your phone or half-watching another episode of House Hunters is probably a better use of your time.

That said – never underestimate the value of your “me time”.

You don’t need to be productive 24 hours a day. Not only is it okay to take breaks to mindlessly play on your phone or watch tv, your body and your mind needs it. Just be honest with yourself and make sure you’re actually taking time to unwind and aren’t just procrastinating.

3. You Have to Start Somewhere

Another big reason I accepted $15 jobs was that I was new to freelance writing.

As awesome as it would be to make $500 per post, I knew it wasn’t realistic. I had to start somewhere, and for me, that somewhere paid $15. Which I’ve since learned was actually pretty lucky, considering there are freelance writers that were (and still are) only being paid $3 per post.

Although I’ve been writing in various capacities all my life, my blog was still pretty new at the time and was filled with mostly personal posts. People that knew me in real life knew that I could write, but the Internet didn’t.

Now I’m not saying you have to accept low paying jobs just because you’re new.

4. Write What You Know (Or Are At Least Interested In)

Before I actually accepted my first freelance writing gig, I turned down another, better offer.

The problem? They ran a military personal finance blog. And I am not in the military, nor do I know anyone that is. But that didn’t stop me. I mean, I was already writing about money, how hard could it be to add a little military to it?

Turns out it was a lot harder than I thought. I spent days reading other military personal finance blogs to try to learn more about it and figure out what made this sub-genre different. But it was immediately clear from my first draft post that I didn’t know what I was talking about – and likely never would.

Writing about what you already know – especially as a new writer – just makes sense. You are more likely to write posts faster, write more often, and establish yourself a lot quicker.

You can also use this opportunity to learn more about topics that you’re interested in. A lot of my first posts were about money and weddings because I was newly engaged and was already spending a lot of my time looking up stuff about weddings, anyways. So it made sense for me to write about it, too.

5. You Probably Won’t Make a Living From It

I’m not saying it’s impossible to make a living from freelance writing. I know that it is possible because I’ve seen it happen to other bloggers. But like I said at the start of this post, I’ve seen even more bloggers fail at it.

Sure, I haven’t spent the last 5 years pursuing freelance writing with the intent of making a living from it. But I’m no longer “new” and thought that my experience would warrant a higher rate.

Or at the very least that this base rate would increase along with the cost of living.

But nope! I was wrong.

Nearly 5 years after I first started freelance writing as a side hustle, I’m still predominantly getting $15 writing jobs. Which means I’m actually making less per post now than when I first started.

(I have my own theories as to why this is the case, including the fact that only ONE site that I wrote for back between 2014-2016 still exists online).

According to UpWork, the majority of the U.S. workforce will soon freelance and nearly 50% of millennial workers are already freelancing. So the competition is growing more and more every day.

For every freelance writer that makes $500 a post, there are a thousand that are willing to write that post for $5. So that’s what the market, in general, is willing to pay. Which probably isn’t enough to make a living off of.

6. Freelance Writing Isn’t For Everyone

I love writing. But I also like to sit and think about what I write – sometimes for days and sometimes for years. (Yes, years!) And then I’ll go back and edit a post a dozen times or more.

I also get hung up on the “rules” far too much. My voice gets lost amongst the SEO, keywords, algorithms and adding all the affiliate links – because I let it.

So I know that I’m not ready to make a living freelance writing and am better off doing it on the side or as part of my job instead. And that’s okay! I like doing the “other stuff” that comes with writing (editing, formatting posts, making images, etc.) just as much as I like writing. Which is why I’ve pursued that type of work over writing jobs.

But I wouldn’t have known this if I didn’t try.

So if you’re thinking about becoming a freelance writer, go for it! There are a ton of (free and paid) resources and courses available that can help you determine if it’s the right thing for you or not.

YOUR TURN: If you are already writing, what have you learned from freelance writing so far?

If you are considering getting into freelance writing, what’s stopping you? What else would you like to know about it?