My wallet was literally beginning to crumble and I had to buy a new one, which turned out to be a lot harder than I’d originally anticipated. Since when do wallets cost upwards of $50?  Is this new, or have I just been buying cheap wallets that are, well, cheap? And why are they all so massive? They have flaps and pockets for cards everywhere, but nowhere to put actual cash or change? I don’t need need all those slots, since I don’t carry that many cards… or so I thought: 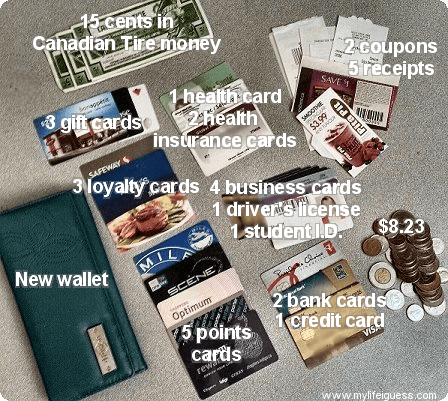 Maybe I DO need to clean out my wallet the extra card slots after all! (Seriously though, I haven’t been in school for 4 years and I still carry my student ID? And who carries around Canadian Tire money?? Honestly, Amanda, get it together!)

It turns out that not only am I carrying more cards and crap than I thought, but I’m also carry around a whole lot of “money” – even when there isn’t any paper or polymer in sight – and I betcha you are, too.

That picture above is actually worth over $740!!

[* I’m also needlessly carrying around a Porter Airlines Point Card. I’m about 65% of the way towards earning a free one-way flight which could be worth up to another $700.]

If my wallet were to end up in the wrong hands, it would be so easy for someone to redeem steal my points and gift cards while I frantically cancel my credit card and bank cards, and get new ID. Of course, some would be much easier to redeem than others (most notably Shoppers, Scene and Chapters) and I’d hope that my credit card and bank card points would be secure. But that’s still hypothetically over $400 of my “money” gone like that. Yikes!

Points can be pretty awesome.  My bff, a former flight attendant, used her credit card for everything when she was gallivanting across the planet, and quickly had enough points for a “free” iPad (by redeeming the points for Future Shop gift cards). And I think it’s pretty cool that some points cards let you donate your points to charities instead.

But they can also be a trap to get you to spend more: “Buy 3 of these things you don’t need to earn 20 points!”  Or buy crap from their online “stores” because there are only so many items or gift cards available. This is especially true for those of us that don’t live in or near major cities, and don’t have access to many of the participating stores/restaurants (which is probably why I prefer the cards that give discounts on my purchases at the point of sale instead). Or they’re impossible to redeem. Or they just flat out lie.

Or you can accidentally become a points hoarder like me, and not even realize it.

I’ve been collecting points on one card or another for over 15 years, and have only ONCE redeemed any of my loyalty points. The cashier at Chapters asked me “Would you like to save $5 on today’s purchase?” to which I of course said yes, and it wasn’t until I got home that I realized what had went down. It can take a long time to collect enough points to make it worthwhile, so for someone like me who doesn’t make a lot money or spend a lot of money, it’s not even on our radar most of the time until the cashier asks.

But, here’s the kicker – a lot of these points have recently introduced expiration dates. Betcha didn’t know that, either!

Air Miles, for example, now expire after 5 years. (This started in December 2011, meaning all points are still good at least until the end of 2016).

Somehow my simple need to replace my wallet has led to yet another wonderful personal finance lesson for us all. Now go forth and redeem those points! (Or transfer them to me, if you don’t want them?)

Do you know how much the contents of your wallet are actually worth?

Are you a points hoarder, too? If so, are you saving up from something specific, or just haven’t bothered redeeming?

11 thoughts on “Betcha Don’t Know What’s In Your Wallet!”